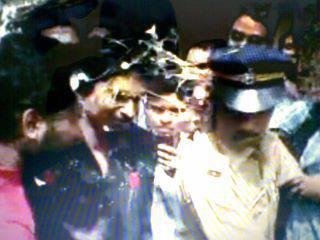 U Tube hero Santhosh Padit is again in the news headlines. This time not with the announcement of his new movie but regarding a surprise gift which the 'young star' received after an inauguration function in Peruthalmanna. This would be the first occasion for Santhosh to get the real reward from the audience after the grand success of his recent released movie 'Krishnanum Radhayum' which is making waves in the theatres. The movie is reported to release in bangluru too.

The incident happened on 3rd November during the inauguration of a beauty parlour in Perinthalmanna near Kozhikode. The 'Alien Star' was greeted by the people with claps as he arrived in the beauty parlour. Demanded by the audience Santhosh started singing his much popular song 'Rathiri Shivarathri' from the movie 'Krishnanum Radhayum'. How much can they control themselves from hearing this 'sweet song'? Then started the real 'WAR'. People started throwing rotten eggs and tomatoes at the new hero. Few started to fling abusive words which they might have kept as stock to share.

The 'actor' tried to flee from the spot in his car, but how could the audience leave him bare hand? They followed him and started to continue the show. The act of the police to help Santhosh leave the ground also had gone in vain as they too had to taste the sweetness of rotten eggs and tomatoes. Some how he managed to get in to his car and flew from the place. 'Thank God' for the millions of keralalites who have missed his movie. Other wise the situation would have been more horrible. We really feel envy on those people who got a rare occasion to see him.

But the fans association of the actor says this attack is a pre planned one. Any way we can expect that Sathosh would be more vigilant while appearing before the public.

Santhosh Pandit has become a household name with his active presence in U Tube. Almost all his videos uploaded in internet are getting huge viewership day be day. After the 'Silsila Syndrome' songs of Santhosh are becoming hit. Even though his first movie got released in a very few theatres, as per reports most of the theatres are doing well with the collection.

The acts of Santhosh resembles to the character Saroj Kumar which was played by Sreenivasan in the movie 'Udyanaanu Thaaram'. Can we expect more magic from Santhosh in his next movies? The popularity he got from his movie and songs has really surprised the hands behind malayalam movies.

Any way we are so humbled not to write more on Santhosh. What we can do is to pray for the healthy life of the 'actor'.

Did you enjoy reading this article and video? The author of this article had taken much pain in doing much research to bring up this article. Do you like to read more about Santhosh Pandit? The author is ready to write more on it. Mean while do you like to congratulate him for his effort? Do give a credit to the author by using the social network buttons embedded here. Please share this article with your like ones.