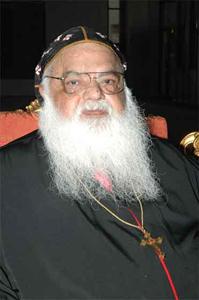 With heartfelt grief we are reporting the sad demise of His Grace Job Mar Philoxenous Metropolitan. Malankara Orthodox Church Delhi Diocese Metropolitan Job Mar Philoxenos Metropolitan passed away at 7.30 on Sunday (November 20) morning at Medical College Hospital, Kolenchery at the age of 71. He had been under going treatment in the hospital since September. The funeral service will be held on 22nd November(Tuesday) at Mount Tabore Dayara, Pathanapuram.

Metropolitan Job Mar Philoxenos born at Mepral near thiruvalla joined the Mount Tabor Dayara, Pathanapuram at the age of 16. Being a member of the dayara, he spend his whole life for the spiritual and social development of the society. After completing a Masters Degree in Literature he served as a faculty of Stephen's College, Pathanapuram till he was elevated as an Episcopal candidate in 1989. In 1991 he was appointed as the Assistant Metropolitian of Delhi Diocese. Ordained as Metropolitan in 2002, he was given the full charge as Metropolitan of the diocese in 2008.

The dedication shown by His Grace, weaved with commitment had really brought new life for the growth of Orthodox Church. His dedication and hard work had given success in completing different projects which include the consecration of 16 new parishes and a retreat center in remembrance of Dr. Paulose Mar Gregorios valaiya Thirumeni. He had been a blessing not only to people of delhi but also to the near by villages too. He succeeded in establishing the Shantigram which has space for an English Medium School and a Clinic which serves for the ailing villagers.

With no doubt we can say that the through out the entire life Thirumeni would remain in the hearts of millions who had enjoyed the sweetness of his love.