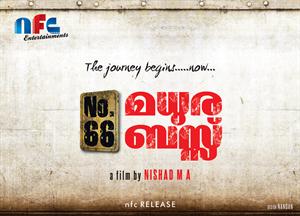 MA Nishad has been recognized for being a socially committed movie maker coming up with stories related to social issues and real life. His previous movies Pakal, Nakaram, Vairam, and Aayudam had touched the hearts of millions which even got appreciations from critics. While most of the movies makers in Malayalam try to satisfy the audience with unnatural narrations, the way Nishad follows is quite different which makes him stand alone from the crowd. Each of his previous movies focused on issues related to the society. The theme of the Nishad's upcoming movie 'No.66 Madhura Bus' rolls around the problems faced by prisoners and their families and also how the society turns their face against them. Popular south Indian actor Pashupathi plays the lead character 'Varadharajan' in the movie. This would be third movie of Pashupathi in Malayalam second with Nishad after 'Vairam'.

The role of Pashupathi in the movie would be one of his best in his career who had got much praise for his acting in the movie 'Vairam'. Another highlight of the movie is the presence Makarand Deshpandey a well-known Hindi film actor and a theater artist who had shown his talents in movies like Sarfarosh, Swades and many other movies in Hindi and Marathi. As per information from reliable sources there are few confrontation scenes between the two great actors Pashupathy and Makarand which would add fuel in between the lines of the movie. The cast of the movie includes Padmapriya, Shwetha Menon ,Thilakan, Jagathy, Jagadeesh, Ashokan, Mallika, Seema.G Nair, Jayalalitha, Anil Murali, Sudheer Karamana, Biju Pappen, Kalinga Sasi, Vinod Kidamangalam etc. Urvashi is playing a special appearance which brings some real twist in the story of the movie.

No.66 Madurai Bus movie Pooja with the participation of people 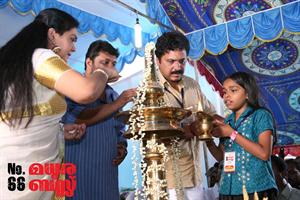 Nishad who has come up with unique movies wanted the pooja of his latest movie No.66 madurai bus too in a inimitable way. In the presence of hundreds gathered at Punalur Chemanthoor High School on 5th December 2011, the Pooja of the movie was held. The pooja of the movie was one of its kinds in the history of Indian Cinema being the first movie getting the start with the participation of the people. Rasnamol who was selected from the audience lighted the lamp. The function became a colourful event with the presence of minsters like K B Genesh Kumar, Dr M.K Munir, Shibu Baby John, Malayala Manorama Editor in Charge K.A Francis, Former Minister C.Divakaran, A.K Raju MLA and other dignitaries. Many artists who are much active in movies and serials also added colours to this function. It was a unique moment for the people of Punalur to see their favourite stars just in front of them. 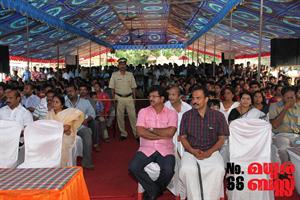 As per latest news, the shooting of the movie has begun at various locations near Punalur. The camera of the movie is handled by much experienced Pradeep Nair who had shown his talent behind the camera in movies which includes Cocktail, August 15, Janapriyan, Sankaranum Mohanaum and Sandwich. The script of the movie No.66 Madurai Bus is being penned by K. V Anil a multitalented personality tagged as a popular Novelist and Journalist. Already various stories written by Anil had been well accepted by the readers and the characters in the novels got life in Serials which also received good response from the family audience.

This movie will can be said to be a team work of a group coming together for the cause of a good creation. SpiderKerala would be in the fore front bringing more updates on the movie in the coming days. Let us wish good luck for the unique venture.