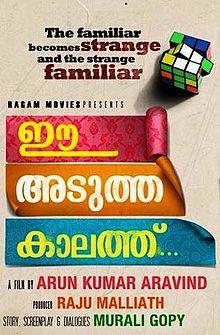 Arun Kumar Aravind was initially known as the favourite editor of Priyadarsan. But he has already got a foothold in the Malayalam film industry with his maiden directorial movie Cocktail, scripted by Anoop Menon. Cocktail, which featured Jayasurya and Anoop Menon in the leads, was a surprise hit. Eventhough the film was a remake, it earned acclaims for the whole crew. The editor turned director is now busy with his latest venture titled 'Ee Adutha Kalathu' (In Recent Times). The movie's tag reads as 'The familiar becomes strange and the strange familiar..' Murali Gopy, the son of Bharath Gopy is turning a scriptwriter through the movie. Murali, who has already made his presence through Bhramaram and Gaddama, is also doing an important role in the film. Ee Adutha Kaalath will feature Indrajith, Nishan and Anoop Menon in important roles.

The movie features the lives of six different persons from as many different levels of the society. In a certain stage, they happen to be interconnected unknowingly. A metro city forms the backdrop of the film. The central characters are Vinod and his wife Ramani who are in the business of buying and selling old household things, a policeman named Tom Cherian, Ajay Kurian, the managing director of a high tech hospital and his wife Madhuri and Roopa, a Radio Jockey.

The film is said to be a thrilling love story. It is based on a real incident happened recently, that is why it is named so.

Indrajith and Mythili play Vinod and Ramani. Anoop Menon appears as Tom Cherian. Murali Gopy and Tanushree Ghosh portray Ajay Kurien and Madhuri. Lena appears as Roopa. The film cast also includes Nishan, Jagathy Sreekumar, Suraj Venjaramoodu, Jishnu, Baiju and Indrans. Thanushree, a model and stage artist, is making her film debut through this. The camera is handled by Shehnad Jalal, who recieved the State film award for his excellent work in the film Chitrasoothram. The film is produced by Raju Malliath under the banner of Ragam Movies. The shooting has been completed and the post production works are progressing. Ee Adutha Kaalath is expected to hit the theatres in February 2012.