The king is back again! Sharukh Khan's latest thriller Don 2 is a sequel of the movie directed by Farhan Aktar. After the grand success of Don, Sharukh Khan has teamed up with Farhan Khan to enthrall the audience. Even months before the release of the movie, it had created waves across the country with its trailers and first visuals. Let us see what Don 2 has packed up for the fans.

Don (Sharukh Khan) is back with a new mission. This time his plan is get inside the security vault in Berlin where the currency plates of Euro are kept. Does Don succeed in bringing out his plan? What happens later...? 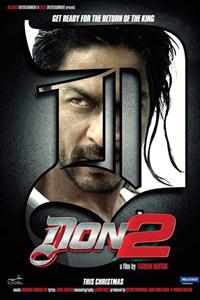 Don 2 is an action packed thriller which makes the audience stick to the seat biting nails. A neatly defined plot with unpredicted twists makes the movie go. The movie is really a visual treat for the audience fully loaded with stunning action sequences and mesmerizing locations. The movie enthralls you with its charismatic choreography and breath taking climax scene. Don 2 is a well planned movie while the director Farhan needs more applause. The chase scenes, fights and almost each and every aspect are comparatively equal to a Hollywood movie. One of the highlight of the movie is the car chase between Sharukh Khan and Priyanka which really increase the heart beat of the spectators. The prison-breaking sequence is some thing which you should not miss. Sharukh Khan and Priyanka have done their part well giving 101% dedication their characters. The songs created by Shankar-Ehsaan-Loy are good. So for this Christmas vacation do enjoy the movie with your dear ones.