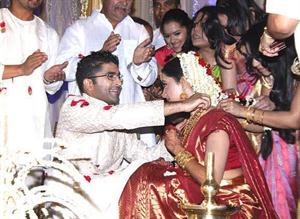 Malayalam actress and one of the South Indian beauties Mamta Mohandas got married to her longtime family friend Prajith Padmanabhan on 28th December, Wednesday. Prajith is a businessman based in Bahrain and a childhood friend of the actress.

The marriage function was conducted at a star hotel in Kozhikode city. The function was attended by many personalities in the Cinema fraternity of South India. Many of Mamta's friends and relatives were also present to grace the ceremony.

Earlier, Mamta and Prajith got engaged on November 11 at Muvattupuzha in Ernakulam. Mamta, currently one of the most popular actresses in South India, debuted in Malayalam movie 'Mayookham' directed by the veteran filmmaker Hariharan in 2005. Though the film was not that much success in Box office, Mamtha's performance was noted by many persons. Then onwards, she got myriad opportunities from various languages. She was introduced to Kollywood through the film 'Shivappathigaram' starring Vishal. As of now, she has acted in almost 35 movies, spreading over Malayalam, Tamil, Telegu and Kannada.

During a career spanning over 6 years, Mamta has acted opposite all the three superstars in Malayalam Cinema, Mammootty, Mohanlal and Suresh Gopi. She has also acted alongside Jayaram, Dileep, Prithviraj, Kunchacko Boban, Indrajith and other heroes. She won a Filmfare award for Best Actress for the performance in 'Katha Tudarunnu'.

Apart from an actor, Mamta is a well known model and a trained singer also. She has sung a number of songs Tamil, Telugu and Malayalam films and earned a Filmfare award in Telugu.

Mamta is also a cancer survivor. She tackled the difficulties with courage and confidence. She is currently working in a few films including 'Njanum Ente Familyum' with Jayaram and Padmasree Dr. Saroj Kumar with Srinivasan. Mamta is also active in social networking site Twitter.

Mamta Mohandas is currently one of the hottest heroines of Malayalam film industry. She has done a lot of films in a short span of time in Malayalam, Telugu and Tamil films. Read more to know the profile, bio data, awards, filmography, early life and facts of Mamta Mohandas.

Mamtha Mohandas Engagement News: Mamta is getting Engaged on November 11

Read Mamtha Mohandas Engagement News. Breaking news from the south film industry is another star marriage. The glam queen Mamta mohandas is getting engaged on November 11(11-11-11). She will get engaged to her childhood sweetheart who is currently settled in Bahrain.Her marriage is expected to takes place by next year. She is currently in shoot of 3 Malayalam Movie and a Tamil movie with Vijay.