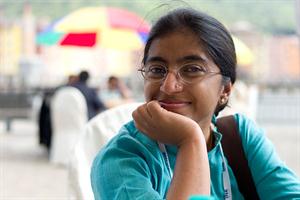 Prominent Social activist Dr. Sunitha Krishnan has been declared 'Indiavision Person of the Year' for 2011. KJ Yesudas, Fr. Joy Nirapel and Prof. CP Roy and Saleem Ahammed were the other persons included in the nominees list.

The selection was made by a panel headed by prominent writer MT Vasudevan Nair. Media personality TJS George, Writer Sethu and former Chief Secretary Padma Ramachandran were the other members of the panel.

"A work of hazardous nature that even a lifetime of a person is considered insufficient to achieve the goal, had been successfully accomplished by Dr Sunitha Krishan and her team in Prajwala", the jury chairman opined. The award carries a cash prize of Rs. 1 lakh and a citation.

Born 1972, Sunita is the chief functionary and cofounder of the NGO named 'Prajwala', based at Hyderabad, which extends its help for the rehabilitation of the trafficked women. The venture also helps around five thousand children infected with HIV in Hyderabad to pay for the education expenses.

Prajwala has concreted their operations at 17 centres in South India. They have saved more than 3200 women from the brothels. Prajwala raises strong voice against human traficking. The organisation also cares in training the saved women in carpentry, welding, printing, masonry and housekeeping. Sunita has won many awards including Global Leadership Award 2011, Vanitha Women of the Year 2009 and CNN-IBN Real Hero award 2009.

Sunita and her organisation's a new initiative, named 'Nirbhaya', is to be launched in Kerala soon. It will address the rescue and rehabilitation of sexually exploited and traded women here.

The Person of the Year award was constituted by Indiavision Satellite Communications Ltd to recognise the people who contribute in bringing a substantial change in the life of individuals and thereby in the society. Endosulfan activist Leelakumari Amma was the winner of last year.

Erumeli Petta Thullal 2012 to be held on 12th January