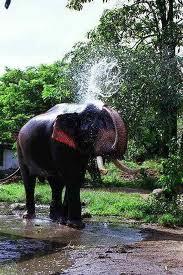 In India elephants like many other plants, birds and animals are considered as sacred. Elephants are considered as the living symbols of the Lord Ganapathi the remover of all obstacles from the path of our lives and. Similar to the cow which is also worshiped in India as 'Sri', gomaatha or 'prosperity' elephant too is considered as symbol of prosperity and are revered. This is the corollary in respect of all other items considered as sacred and worshiped like the mice, snake, peacock, pig Tulsi, Neem, Peepal. In short you name it, in India it is special. This consideration is from the philosophy of oneness of everything. Since our subject is elephant we come back to the elephants.

For Kerala comparing to any other place in the world elephants are divine and any religious functions of Hindus, Muslims or Christians cannot take place without the presence of at least one elephant, unless the organizers are so poor. The giving of importance to almost all the living things in the plant, animal, aquatic and aviary etc is to stop the wanton destruction of these flora and fauna to maintain the ecological equilibrium. But of late things are changing fast in respect of these views for the sake of making fast bucks. The case of elephants is also not different. Let us have a look of the conditions and the remedies for the difficulties in respect of the elephants.

In spite of the reverence these animals especially the elephants, are abused by the very same people who consider them as sacred animals. The condition of these divine animals, the elephants are pathetic and are treated in cruel and brutal disregard for their sufferings and pains. For these divine animals life is not at all divine. For the owners of these magnificent animals they are the money spinning equipments. As per an estimate made there are about 15,000 captive elephants in the world. The largest single territory though very small in terms of area and land availability per person is Kerala with maximum concentration of the captive elephants is the State of Kerala, the South western tip of the Indian sub continent.

About 26% of the captive elephants numbering about 1000 are owned by religious institutions and individuals. The main use and remunerative occupation for the owners of elephants is to lend them for the festivals of the temples, churches and mosques to make the elephants as a part of the festivals and functions. The average daily income from the rents of the elephants to their owners ranges from Rs 25,000 to about 40,000 per day during the religious festivals. Elephants whose names are known to the people of an area earn huge sums.

The musth season of elephants

The peak period of the festivals falls in the winter months. And unfortunately for the elephants mainly the tuskers (bull elephants – which are the maximum captives in Kerala) this peak season coincides with the season of the musth (period of rutt). This period of rutt or musth is the time when the elephants require maximum rest. But the owners do not want to lose the income do not rest the elephants during the time musth. The period of musth will be about 2 months. When the temporal glands between the eyes and the ears start oozing the danger level of the animal would have crossed resulting in violence and killings of mahouts or innocent bystanders.

The owners and mahout believes that the problem of musth can be controlled by starving it and beating or poking sharp instruments. The public also joins in the torture by throwing stones or sharp sticks. This in turn makes the elephants more violent. Naturally the elephants so forced to exert retaliate resulting in the attacks of the mahout, owners and others. For this also the elephants are punished.

Training the elephants for festivals of temples 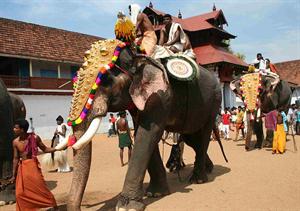 Since the religious functions require special training like making the elephants to be very near to the ear splitting noises of bursting of crackers, the drum beating percussion instruments in large numbers with loud noise, the blinding ultra strong illumination by flood lights and the maddening crowds etc are given. They are also trained for wearing the decoratives throughout the temple festival. The training for making the elephants suitable for temple functions will mostly be by unscientific, crude and cruel methods inflicting injuries on the elephants.

The lure of money and sufferings of elephants

There is severe shortage of elephants trained to withstand the effects of heat, dust, glare, noise and crowd etc to meet the requirements of the religious places of all religion in Kerala. As the demand for the trained elephants is very high in many cases the elephants have to work continuously for 2 to 5 days without rest break.

When the lucrative income from religious functions stops, these elephants are sent out to forests to help the timber merchants to shift the tree trunks and logs and to load on to trucks.

The mahouts cuts or pulls the hair from the tail and sell for money as there is demand for the hair making the tail useless in keeping the insects and parasites away from the body of the elephants.

Another serious problem is that almost all the mahouts are alcoholics and will have no control over selves and hence cannot control the elephants properly. This results in injury being inflicted on the elephants by urchins sadists by throwing stones, sticks etc. There is severe shortage of trained mahout with skills to find out in time the moods of the elephants and attend to them properly.

The elephantine problems of summer season

The elephants are not comfortable in summer and heat. They require lot of water to drink and they are supposed to be in the water body for a considerable time of the day. Unfortunately these necessities are not often met even to the barest minimum.

In summer the elephants will be made to rush from place to place long distances on the tar or mettle roads for attending functions involving lengthy processions to the accompaniments of loud wind and loud drum percussion instruments making their life miserable often provoking them to attack the human beings nearby. In summer season the walk involve in scorching heat and tar melting roads blistering the feet.

Lack of exercise facility of the elephants

In the forest where they are to live they get a balanced fodder consisting of natural fodders of grass, plants and tree leaves. In captivity they have no such food facility. They have to satisfy themselves on whatever food is offered to them by their masters as and when arrange.

The elephants belong to the open wild forests, but on captivating them, they are shackled and confined like criminals for no fault of them only to satisfy the greed of human beings.

Most of the time the elephants are shackled either while they are resting which is very little or when they are on duty at temples. At rest they are shackled to some tree from behind on the hind legs with only about a meter or two to move around. At duty they are shackled between their fore leg and hind leg so that they cannot move freely nor they can rest properly. For the huge size and weight the quantity of food and drink elephants should have large quantity of food and water. Elephants should have vigorous exercise/physical activity to keep them fit. With the conditions described they will be most unhealthy and suffering from many types of diseases without being able to express and not getting proper treatments. 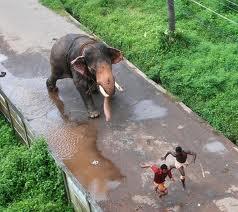 The elephants require large quantity of food in proportion to their size and the fodder is scarce and costly. Hence the owners cut the ration of the elephants. Due to starvation, thirst, stress and mistreatment several elephants have died and there were several cases of the elephants running amok.

Other conditions of difficulties for elephants

There are rules to prohibit bursting of crackers when the elephants are around and the distance of drummers from the elephants has to be at least 4 meters. These rules not adhered to.

For moving elephants from place to place, there is a rule that they are to be transported by trucks. But to save money, they are made to walk for miles.

There is a huge dearth of veterinary doctors competent to check these animals and give treatments in time. Even the competent ones may not be interested in treating them as the remuneration will be very low.

The Silver ling in the clouds for the elephantine problems

A rule is framed to maintain records of feeding treatments given, vaccinations given, the work and the animals' movements etc. Of course it is not being fully implemented. But by surprise checks and punishments these can be made to implement and let us hope the authorities will implements the checks.

It is mandatory to obtain daily certificate from the Government approved veterinary doctors before moving them from a place to another place.

For moving elephants from one district to another a certificate from the chief wild life warden is required. This also requires surprise checks and punishments.

Elephants are not to be made walk long distances on the tarred or concrete surfaces so that their health is not affected. This is also requires the proper implementation.

Fresh hope for the elephants from their elephantine problems 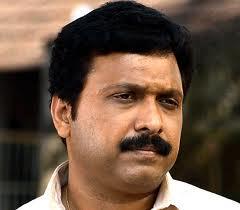 The forest minister Sri K B Ganesh Kumar under whom the captive elephants come, has declared that he is going to set up a hospital for the elephants in Central Kerala most probably at Thrissur.

The vice president of the Elephant Owners Federation has stated that all elephants are registered and the owners are given certificates with the name of the owner and the details of the elephant for identification etc and the conditions of the elephants will improve.

Babu Palisseri the CPI(M) MLA is the president of the Kerala State Elephant Workers' Union of mahouts and their assistants has stated that the union has taken up the awareness campaign to make the mahouts understand the duties and responsibilities connected with their job. They are also made aware of the consequence of the habit of drink on themselves and their families. The mahouts have responded positively and has started cutting down their drinking habits.