Thiruvathira and other main festivals of Kerala

The routine of Thiruvathira day 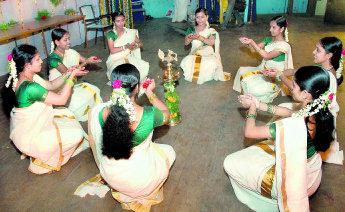 This festival is mainly the festival of ladies and the girls. They get up early in the morning and take bath. In the olden days there used to be ponds and tanks in many houses and the villages or towns will have many common ponds/tanks for public use. The ladies used to go to these tanks to take bath. Their play starts with the bath. They will be singing and playing in the water spraying and splashing water on each other and swimming competing with each other. Those days the ladies and girls had no fear or anxiety about the prying eyes unlike the present days. Of course now there may be few tanks or ponds in the several square miles and even if there are they may be mainly used to wash cloths or domestic animals. All will be taking bath in their respective bath rooms in most probably in warm/hot water as Thiruvathira falls during peak winter season. Those days the bath itself used to be a Thiruvathira affair. After the bath the ladies and girls will be wearing the traditional dresses and use all the beauty enhancing tricks like applying the home made kajal (a black colored eye paste) (now substituted by readymade shopping item), and instead of applying red lipstick chew betel with calcium and areca nut for reddening the lips. The women wear all the ornaments they have.

On the Thiruvathira day the women of Kerala do a kind of semi fast (or in some cases they may fast completely) not take food made out of rice. For lunch they take porridge (Koova podi kanji) made out of arrow-root powder). Fruits will supplement this item of kanji. For the night the women used to roast 8 different varieties of tuber roots in the fire. This was known as the 'ettangadi chuttu thinnuka (eating 8roots roasted). Fruits will be a supplement. Now because of the practical reasons these are not followed in most of the houses. Instead they go for food made out of other grains than rice.

This fast or semi fast by those who are not married is for getting a good husband and those married for maintaining the goodness of the husband or if not good to make him good by Lord Siva.

Other social activities of Thiruvathira 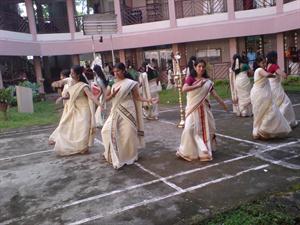 Thiruvathira is known for the group dances of ladies and girls - the Thiruvathirakali also known as kaikottikkali. The dances of the beautiful girls/ladies will be very gracious and beautiful to watch. With sinuous movements (Serpentine way or wavy movements) in a circle pirouetting (a rapid whirling about the body) pattern it is will be sight worthwhile to watch. The movement in the circle also will be sinuous. The dance will be around a bronze/brass lamp lighted with oil and cotton wicks known as nilavilakku. The dance is to the accompaniment of singing and clapping of the palms. For many years this folk dance was performed only during Thiruvathira. But since some years the Thiruvathira dances-Thiruvathirakali has become very popular and is performed for every festival. The ladies on Thiruvathira day spend the whole day and night with singing and dancing. At the midnight in between the singing and dancing there is a ceremony known as pathirappoo (pathira – midnight, poo – flower, choodal – wearing – tucking in hair). In the early morning of the next day the festival will end with the women taking bath and prayers at the temples around. 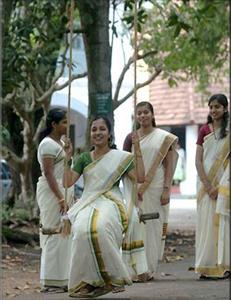 Another activity of the Thiruvathira day is the swinging on the huge swings put up for this purpose. In the earlier years it used to be made with a bamboo spit into two at one end and piece is fixed at the split end to stand or sit on it. The unsplit end is fastened with the help of ropes to the strong braches of the trees. The women and girls swing on these swings. Now due to shortage of the bamboos and for convenience of storage the bamboo swing is replaced by rope swings.

The legend connected with Thiruvathira is that the festival is celebrated to commemorate the killing of Kamadevan, the god of love. The belief is that this is the day goddess Parvathy met Lord Siva after a long and hard penance to marry Lord Siva. The celebration is to rejoice the death of Kamadevan representing the purging of the vices of Kama (lust), krodha (anger)and moha (wants)by keeping the mind stable.

The whole story of the legend is that Goddess Dakshayani consort of Lord Siva went to attend the Yaga being performed by her father Daksha. Daksha did not like Lord Siva and was against the marriage of his daughter Dakshayani to the Lord. Daksha did not invite his daughter and son – in – law for this all important Yaga though everybody else was invited. Lord Siva had tried to dissuade his wife that she will not be welcome at her father's place but the Goddess told the Lord that she will g there and if she was not treated properly , she will not return. When she came to the yaga place, she was not received but instead Daksha started abusing her husband the Lord. She got angry with her father for abusing her husband and jumped into the fore made for the Yaga. With this the Yaga had to be abandoned and Daksha could not achieve the position of the lord of even the gods for which he wanted to perform the Yaga. On the news of the immolation of the Devi, his wife, Lord Siva became angry and came to the Yaga place and with his anger burnt Daksha and his family. He took the burnt body of his wife and started a terrible dance shaking the whole world and opened his 3rd eye. The world started burning. The Lord Vishnu, in order to control Siva used his Sudarshan Chakra (Discus wheel) to cut the charred body into pieces. Wherever the pieces fell a Sakti Peettha came into being. It is believed that the Kali at Kolkata is one of them. The Chengannur Bhagavathi in Kerala at Chengannur is believed to be another piece, the middle portion of the body. Because it is the middle portion, the belief is that the Chengannur Bhagavthi menstruates every month and poojas are not done on these days till no.
After all the pieces were strewn and the charred body is not there to kindle his anger, the anger of Lord Siva came down and he wanted to go and do penance permanently. But there was a demon by name Soora who was tyrannizing all living things. He had obtained a boon from Lord Brahma that he can be killed only by a child born to Siva as he thought that Siva is on permanent penance and hence no chance of his getting a child.

The gods wanted Lord Siva to marry and have a child. Since the Lord is not having any Kama (desire for sensual pleasures) in him, it was difficult for him to marry. So the gods persuaded the god of Kama the Kamadevan to use his trick on Lord Siva so that Kama will enter Siva and he will marry Parvathy, daughter of Himavan who was also doing penance to marry Lord Siva. Kamadevan used his bow of sugar cane and shot a flower arrow (cupid's arrow) on Lord Siva who was disturbed from his penance and the arrow kindled his desires. He became terribly angry and burnt the Kamadevan into ashes by his third eye. All the gods prayed to Lord Siva to give relief to the burnt Kamadevan. Lord Siva agreed and suggested a remedy. Anyway the lord was disturbed from his penance and was not able to concentrate again and according to the requests of all the gods he married Parvathy and they got a child Lord Karthikeya (Subramanya) who killed Soora. The day on which Kamadevan was burnt by Lord Siva happened to be the Thiruvathira day. As it was on that day the Kama was destroyed, it is commemorated every year by the ladies every year.