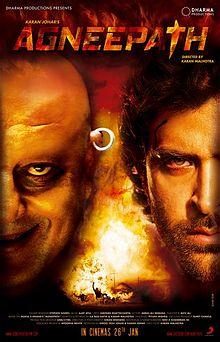 One of the most anticipated Bollywood movies of the year, Hrithik Roshan starrer Agneepath is all set to hit the screens. The movie is the remake of 1990 blockbuster of the same name directed by Mukul Anand starring Amitabh Bachchan and Madhavi. The 2012 version is directed by Karan Malhotra and produced by famous producer-director Karan Johar. Agneepath, translates as Path of Fire, is a big budget action thriller. After the box office and critically hit Zindagi Na Milegi Dobara, the super star Hrithik Roshan is all set to rock the fans. The trailors have made a good impact in the audience. Chikni Chameli, the item number of Katrina Kaif has already made into the hit charts. The film comes with an ensemble cast.

Story and Cast of Agneepath

The movie begins in a small village called Mandwa. The protagonist Vijay Dinanath Chauhan is taught about Agneepath (path of fire) by his father. The happy life of the small family gets ruined by the malevolent drug mafia king Kancha Cheena. Cheena hangs Vijay's father to death. Vijay has to flee with his pregnant mother to Mumbai. There, he is protected by another drug lord Rauf Lala. Growing older, Vijay takes the pledge that he will return back to Mandwa take revenge against his father's murderer. During the journey to his aim, he sacrifices many things. But he is strongly supported by his friend Kaali. The return of Vijay to Mandwa after fifteen years with a vengeanceful heart leads to the ultimate bloodshed.

The role of Vijay is portrayed by Hrithik Roshan. He is reprising the role of Amitabh Bachchan in the original. Sanjay Dutt appears as the antagonist Kancha Cheena, which was played by Danny Denzongpa earlier. Dutt has undergone a large figure change specifically for this film. The role of Kaali is played by Priyanka Chopra and Rishi Kapoor plays Rauf Lala. Zarina Wahab plays Vijay's mother. Om Puri and Deven Bhojani are also included in the cast.

Agneepath had made much news since its announcement. The film shooting was started in January 2011. Director Karan Malhotra is the former assistant of Karan Johar, the producer. The film's satellite rights were sold for a record 41 crore Rupees.

Hrithik Roshan and Priyanka Chopra are once again uniting in the film after the mega hit Krrish. Priyanka has just had another blockbuster Don 2 with Shah Rukh Khan.

The songs are composed by the Ajay-Atul duo and lyrics are written by Amitabh Bhattacharya. The item song Chikni Chameli, which features Katrina Kaif has already found place in hit charts. It is a remake of the Marathi song 'Kombdi Palali' composed by the same people for the Marathi movie Jatra.

Agneepath was earlier reported to be released on November 11 last year. According to latest reports, the film will be hitting a large number of screens including theatres in Kerala on January 26, 2012. The movie is expected to create a tough race for the Mohanlal movie Casanovva releasing the same day.