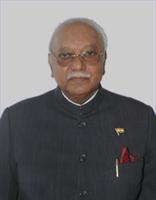 Kerala Governor M.O H Farook passed away on 26th December 2012. M.O.H. Farook died at the Apollo Hospitals in Chennai on 26th January night at the age of 74. He was undergoing treatment for the last few weeks. M.O H Farook had succeeded R.S Gavai to be the 19th governor of Kerala. During his long political career, he had performed his job assigned to him with truth and sincerity. He served as the Chief Minister of the Union Territory of Pondicherry. Being elected to the Lok Sabha from Pondicherry M.O H Farook had been the Union Minister of State for Civil Aviation and Tourism.

The State Government has declared one week mourning while all the schools, colleges and state govt. institutions will remain closed on Friday(27-01-2012).

Read this article to know the profile & biography of M O H Farooq, who will be the new Kerala governor. Currently he is the governor of Jharkhand & he had occupied several positions in his professional career.