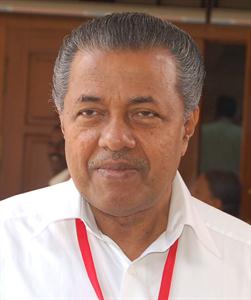 Without any rival, veteran Communist leader Pinarayi Vijayan was re-elected as the General Secretary of the Kerala state unit of Communist Party of India (Marxist) for the fourth successive time on Friday. It is the first time a member being elected as secretary for fourth time in the history of CPI(M). The renewed State Committee has now 85 members. 7 old members were omitted from the committee.

The election took place on the last day of the 20th CPI(M) state conference. Being a strong contender, Vijayan had no opponent and was dubbed as the secretary unanimously.

Vijayan became the party secretary for the first time in 1998. He was also the Minister for Power in the EK Nayanar ministry then. Vijayan hails from Kannur district, dubbed as the cradle of the Communist movement in Kerala. He stepped into politics through the student movements and later joined the Communist party in 1964.

He was elected to the Legislative Assembly for the first time in 1970. Then he went on to be re-elected thrice in 1977, 1991 and 1996. He also served as the power minister in the Nayanar ministry.

In 2002, Vijayan was inducted into the Politburo of CPI(M), the highest administrative body of the party. But his cold war with former Chief Minister and then Politburo member VS Achuthanandan resulted in the suspension of both from the politburo in 2007. The suspension was revoked later.

The political career of Vijayan hasn't been without controversies. He became the first CPI(M) Politburo member to be named in a corruption case when he was named as the seventh accused in the Rs. 374 crore big SNC Lavalin case, by the Central Bureau of Investigation. The case is based on the Kerala State Electricity Board's deal with the Canadian company SNC Lavlin regarding the renovation of power projects when he was the Minister for Power. He has been often at loggerheads with the different communal leaderships including the Catholic church leaderships. His widespread usage of the word Media Syndicate and occassional conflicts with media have also drawn the attention of the society as well. However, his party and comrades are united behind him and lend maximum support what makes him a strong leader.