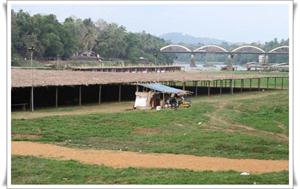 Maramon Convention, the biggest Christian convention in Asia has a long history of existence being held at Maramon, Pathanamthitta, Kerala for the past 116 years. This is the largest Christian convention held annually during the month of February on the banks of the Pampa river, next to the Kozhencherry Bridge attended by millions of believers representing various Christian denominations during a week-long event.

The Maramon Convetion is being held under the auspices of the Syrian Mar Thoma Church, headquartered at Thiruvalla. The 117th edition of the convention had opened on 12th February 2012 with a blessing prayer by Philipose Mar Chrysostum, senior metropolitan, of the Mar Thoma Church. The one week long convention will see some of the popular speakers addressing the meeting which include Bishop Malusi Mpumlwana from South Africa, Rev Martin Alphons from the US and Rev Kang-San-Tan from Malaysia. The main theme of 2012 Convention will is "Arise, let us be going".

An Ecumenical meet is scheduled on February 16th at 10 AM followed by the meet against social evils at 2 pm. As per the program schedule a family meet will be held from February 13 to 15 at 4 pm. With the valedictory message from the Mar Thoma Metropolitan on 19th afternoon will wind up the 2012 Maramon Convention. The Department of Sacred Music and Communication (DSMC) of the Mar Thoma Church will add more colour to the function presenting songs in regular intervals during the convention days.

The KSRTC is providing special services to Maramon from Thiruvalla, Pathanamthitta, Adoor, Pandalam, Konni, Mallappally and Ranni depots during the convention period which would be more convenient for the people to reach the destination in time. Almost all services which include the Kerala Water Authority, Kerala State Electricity board, Water Resources Department, Public Works Department, Police, Fire and Rescue Force, and Health department are well set for the smooth running of the convention.

The first convention was held for from 8 to 17 March 1895 on the banks of Pampa River. At present the Convention is held for eight days during the month of February every year attended by lakhs of believers. Various stalls, restaurants do function under the control of the church authorities.