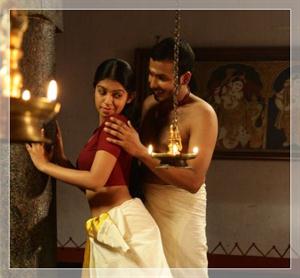 It's all happening. Malayalam cinema producers are seeming to have set a beeline for remaking the old films, especially cult hits. Following the same trend, now another film is to be remade. A remake of Rasaleela, a movie that captured the hearts of the audience 36 years ago, is on the anvil now. Rasaleela was released in 1975 in the direction of N Shankaran Nair. The new version is directed by not-so-famous Majeed Maranchery. Fresh faces are playing the lead roles, Dharshan and Prathishta. Ulaganayagan Kamal Hasan and Jayasudha were the leads in the original.

The screenplay is written by the director Majeed himself. Susheel Kumar is doing the cinematography. The songs in the films are penned by Vayalar Sharatchandra Varma and composed by Sanjay Chaudhari, the son of legendary music director Salil Chaudhari. Since the songs original were made by the fathers of these duo, this will be a uncommon union. The movie is produced by SBM Entertainment.

Rasaleela is making its way to the lineup of the old films that take a new dress. It was all started with Neelathamara, remade by Laljose. Then came Bharathan's Rathinirvedam, re-shot by Rajeev Kumar.

When Rathinirvedam found success at boxoffice, many directors were convinced to take the same route. A number of yesteryear films, including Takara and Chattakkari are there on the anvil now. Nidra is getting released soon. Undoubtedly, this is the spring of remakes, as it seems. Let's wait to see what can Rasaleela add to that.