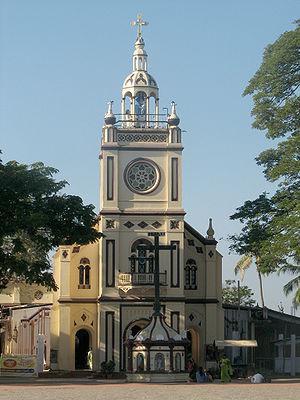 Vallarpdam Basilica is famous centre of pilgrimage, it is the church dedicated to Mary and Infant Jesus. Thousands of domestic and international devotees are regularly visiting here to seek blessings of Mary and infant Jesus. The church is located near to Vallarpadam Terminl and Goshree Bridge, about one kilometer distance from Ernakulam Boat Jetty. The people believed that 'Vallarpadathamma, mother of Infant Jesus will save the devotees from violent storms and situations as their mother. Vallarpadam Basilica is one of the ancient Christian churches in India.

The first church of Vallarpadathamma was built by Portuguese followers in 1524. But in a flood the island is fully submerged by water, in which the church is located, and the church was destroyed. Later a new one was built on the same land. Now this church is considered as a special one in Asia. More than few years before reaching to this church is more difficult because of the church is located in an island and there was no required boat service to this island. But now we can reach there very easy from Ernakulam through Ghoshree Bridge.

The story of miracle behind Vallarpdam Church is that, a lady named Meenakshiyamma, she was a Hindu Nair lady, a member of honorable family Palliyilveedu, was going to Mattancherry with her son in a traditional boat. During this time the storm arose in the river and the boat was sunken. The mother and her child were dropped into the river. While they were in dangerous situation the Nair lady was promised to the Vallarpadathamma that if they were rescued by her they would be her servants until their death. On the third day of the incident a miracle had happened that the mother and her son were rescued by a fisherman, as per the instructions in his dream.

After this incident Meenakshiyamma and her son received baptism, a religious sacrament marked by the symbolic application of water to the head or immersion of the body into water, and became Christians and were changed their name as Mary and Jesudas respectively. They were living in the Churchyard it self and declared the "good news" to all devotees who came there. Their family is still living here just near to the church.

Every year from September 16th to 24th celebrating there as the feast of Vallarpadathamma, during these days thousands devotees from all parts of the country visiting here and participating in the Feast. The last day of feast 24th September is most significant.