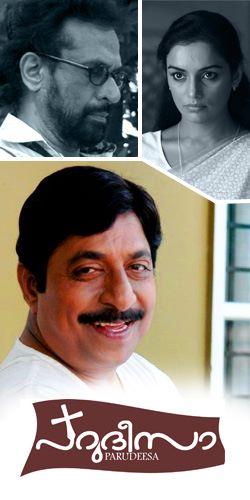 Again another Malayalam film is coming with the story of happenings in a remote village of Kerala. Parudeesa, a movie directed by R Sarath is the one on anvil. Sreenivasan and Thampi Antony play the lead characters in the movie.

The story is set in a mountaneous village in Kerala named Pullanimala. The native people are very hardworking and kindhearted. Father Aanjilithanam is the priest of the Church there as well. He is very keen in following the religious customs and never handles any subject apart from it. He is very conservative.

But his aid and sexton, Jose is entirely opposite to the Father. Jose is a progressive thinker and a kind who believes that Christ was a great revolutionary. Thresya is the servant of Father Aanjilithanam and Leelamma is her friend. Their acts and the changes that make in the society are portrayed in Parudeesa.

The screenplay of the movie is penned by Vinu Abraham. Cinematography is handled by Sajan Kalathil. The lyrics by ONV Kurup and Thampi Antony are set to tune by Ouseppachan. The movie shooting is on progress and is expected to be released in mid-2012.