Vishu is one of the Hindu festivals of South India. Mainly Vishu is celebrated in Kerala, in the first of Malayalam month "Medam" (April – May). This is also considered as the beginning of Malayalam New Year. Actually this occasion is a special day for all Hindus all over India, but celebrated in different names. According to the Indian astrological calculations, this occasion represents the transition of the Sun to Meda Rasi and on this day it is considered that day and night are equally divided. The major ritual events of Vishu day are 'Vishukkani' and 'Vishukaineettam'. 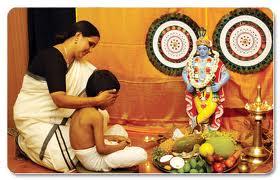 Vishukkani literally means 'the first visual to be seen on the day after wake up'. This is a pure ritual which is traditionally followed over many years. Vishukkani is a particular arrangement of the various things like Konna flower ( a yellow color flower), metal mirror, coins, holy text 'Bhagavath Geetha', gold, new cloth (Kodi), fruits like mango, jack fruit, pine apple, lemon etc, coconut, arecanut and almost all vegetables. These all things are arranged inside a bell metal vessel called 'Uruli'. The Vishukkani is placed in the pooja room and in front of the image or sculpture of Lord Sree Krishna. A lamp (Nilavilakku) is also placed near the Vishukkani. Vishukkani is prepared by the oldest member of the family prepared on the previous night of Vishu. And on the early morning of the Vishu day he/ she views the Vishukkani first, light up the Nilavilakku and wake up the other members of the family and sets them to see their Vishukkani.

Malayalees believe that the seeing of Vishukkani brings happiness and prosperity in their fortune throughout the year. Vishukkani is also prepared in temples. The Vishu Kanikaanal of Guruvayoor Sree Krishna temple and Sabarimale Sree Ayyappa temple are very famous, so that there will be huge rush during this season.

Konna flower is the major ingredient of the Vishukkani as this flower is considered as the symbol of prosperity. Kanikkonna is only flowered during Vishu season. 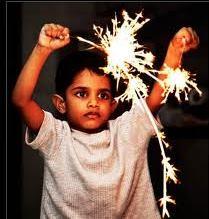 After seeing the Vishukani, it is a ritual that the elder members of the family give money coins (Vishukaineettam) to their younger ones. It is believed that by giving and receiving Vishukanineettam brings good fortune and wealth to the members of that family.

Usually on the Vishu day people wear new clothes (Vishukodi) as this day is the opening of a fresh year. Sadhya and Vishukanji are prepared on this day. Vishukanji is prepared of rice, coconut milk etc.

In Malabar part of Kerala people celebrate Vishu with lights and crackers. People enjoy with fireworks on the previous night and on the early morning of Vishu after seeing the Vishukkani.