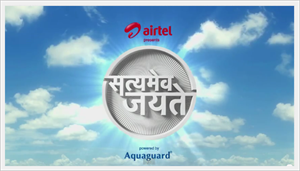 Popular bollywood actor and film maker Amir Khan is stepping into small screen with an upcoming TV show titled as 'Satyamev Jayathe'. After Amitabh Bachan, Sharukh Khan and Salman Khan now it's the turn of Amir Khan to enter into the hearts of television viewers through the TV show 'Satyamev Jayathe'. This program will be aired on Star Networking sites like STAR Pravah, STAR Jalsa, STAR Utsav,Star Vijay and Asianet. Simultaneously Sathyamev Jayathe will be telecasted on Doordarshan too. It is known that Satyamev Jayathe is scheduled to telecast on Sundays at 11 AM. The telecast time of the program was decided to fix to Sunday morning as per the wish of Amir Khan who is well known about the success of much popular TV shows like Mahabharata and Ramayana which were being aired on Sunday mornings and had reached the hearts of millions and was running for years with much success.

Recently Amir Khan who was in Kerala for the promotion of 'Satyamev Jayathe' organized by Asianet, got a welcome reception from the audience. The Amir Khan show is being sponsored by Airtel and Aqua guard while it is backed by Coca-Cola, Johnson & Johnson, Skoda Auto, Axis Bank, Berger Paints and Dixcy Scott as the associate sponsors. It is also known that the title sponsorship of the program had been signed for around Rs 16-20 crores while the associate sponsors have paid Rs 6-7 crores. The STAR Indian network will exclusively give the advertising slot only to their sponsors and not to any of their competitors. In the initial days of framing the program, Amir Khan was reportedly frustrated about the show, but later came to the running track when known about the theme.

Amir Khan traveled to different parts of the country visiting various places including Kerala, Rajasthan, Kashmir, Delhi, Punjab and north east states. As known there will be 16 songs which are created for 16 episodes to be telecast in the inaugural season. There will be a 22 minute length song which is considered to be a dream song reflecting humanity and nationality. Already the video of the song posted in YouTube has made waves among the viewers who love to hear the song again and again.

As per the promotional campaign 'Satyamev Jayathe' will be show in movie theatres. The theme song will be promoted through the theatre campaign with around 300 theatres up for the promos. The responses from the audiences will be recorded and screened during movie interval. 'Satyamev Jayathe' will be the first TV show to be promoted in cinema theatres.

The official theme song of Satyamev Jayathe directed by Ram Madhvani was composed by Ram Sampth written by Prasoon Joshi while it was sung by Keerthi Sagathira. The theme song has all the essence and spirit of different states in India reflecting the love of the country. Not much is known about the concept of the show which is officially going to be telecast from 6th May 2012. According to various sources, the show will be sketch on 'the common man' which would focus on the discussion of social issues like child labour, health problems. .