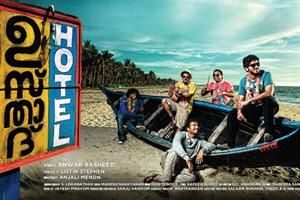 Usthad Hotel is an upcoming malayalam film from the hit director Anwar Rasheed. After directing some hit films like Rajamanikyam, Chotta mumbi, Annan Thambi of the same trend, he shifted to a variation through the film bridge, a part of Kerala Caffe. He radically continuing this trend and forth come with Mammooty's son Dulquar Salman as the hero in Usthad Hotel. The viewers are interested in the new trend set in Malayalam created by new films like Traffic, Chappa Kurish, Salt N Pepper. This has encouraged the director to do his new film with a new face, rather than selecting the mega stars. Nithya Menon will pair with Dulquar Salman in this film. Thilakan also plays a key role in Usthad Hotel. The lady script writer Anjali Menon penned the screen play for this film. While Listin Stephen will poduce this movie under the banner magic frames. Lena, Mamukkoya, Abilash, Siddique, Bhagath manuel etc. are the other cast in this film.

According to the script writer, the starting point of this film was in the location of the movie Kerala Caffe. While sitting together in the location to discuss about the movie, during lunch time someone brought Biriyani packets to the table. The delicious smell of this biriyani made the script writer to ask herself as where is this Biriyani? Then the director Anwar said that it was from the Usthad Hotel. This talk lead to the completion of movie Usthad Hotel.

Usthad Hotel is the second film of Dulquar Salman,the son of Mammooty. He already had done second show as his debut film in Malayalam. He proved himself through the much good performance in the film. Nithya Menon who had already played some notable role in various films, act as pair to Dulquer in this film. Thilakan is the other Key factor of this Anwar Rasheed's film.

Crew of the film Usthad hotel 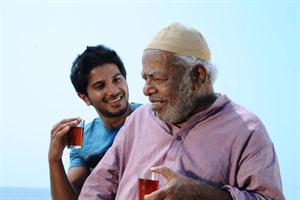 The story of this film revolves around the hotel named Usthad Hotel. Usthad Hotel is one of the famous hotels in Kozhikkod beach, which was successfully running for the past 35 years. The hotel is managed by the old man Kareem, popularly known as Kareemka. He and his food are very much popular in that area, and was the likable person for them. His son Abdul Rasak and family reside in the gulf. Faizy the grand son of Kareem is more attachment with his grand son rather than that of his son. Faizy is a new age youth who enjoy the life successfully and born in a wealthy family and also a gulf malayalee who hade studied and grown up in gulf. But now he is the helper and relief for his grandpa. The role of Faizy handled by Dulquar while the role of Kareem is handled by the veteran actor Thilakan. Faizy return backs to Kerala and starts a music group by combining with his friends named Kallummakaya music brand. In the midst of the story he meets Shahana, who are studying Interior designing. He fells in love with her. The role of Shahana is performed by Nithya menon. She is very charming in looking in this film. And thus the story leads.

The shooting of this film is carried out in Switzerland, Rajastan, Mumbai and Kozhikode. The film is being made by wide canvas and various location making it a big budget film. This film mainly focuses on youth, anyhow also hopes to get the family audience too. The film is likely to release on the second week of May 2012. The film has a clash with the film Hero of emerging superstar Pritviraj. Pritviraj film Hero is action thriller, while the film of Dulquer is a simple film. Let's hope both the film get a box office success.

Read the news about upcoming Malayalam movie Ustad Hotel. The movie is directed by Anwar Rasheed and stars Dulqur Salman, Thilakan and Nithya Menon. It is an emotional thriller about the relationship between a man and his grandson. Read more details below.

Usthad Hotel malayalam movie review and first day reports(FDFS theatre responses) are given here. Much awaited Dulquer Salmans's movie Usthad hotel has arrived in theaters. Can Dulquer able to jump from the shadow of his father? Read Spiderkerala exclusive review on the movie and get decide to book a seat at a near by theatre.