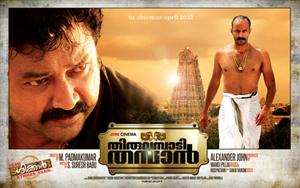 Thiruvambadi Thampan is an upcoming Malayalam film from the hit director Padmakumar after his successful run of Shikkar. The family hero Jayaram and Kannada actress Haripriya handles lead role in this film. Jayaram comes again as character friendly with elephant in this film, after his successful roles in Pattabhishekam and Anachandam. The film is made by the same crew that is in the hit film Shikkar. This film is produced by Alexander John under the banner of Jini cinema. Jagathy, Nedumudi venu, Kishore, Kalabhavan Mani, Suraj Venjaramood etc have done other important character in this film. S. Sureshbabu the script writer of Shikkar penned the screen play for this film.

Kannada actress Haripriya plays the heroine role in this film. She is a very busy artist in Kannada film industry. She also played roles in Tamil and Telugu films. Now she kicked into Malayalam through the debut film Thiruvambadi Thamban. She plays the character role as the wife of Thiruvambadi Thamban. Previously role was decided for Tamil actress Sneha, but due to some issues, she was unable to do this film and Haripriya came in that position. This film also gives debut for the famous Tamil actor Kishore into Malayalam film. Kishore is very popular in Tamil industry; he also played a good villain role in Telugu film with Allu Arjun. He performs as villain in this film. Thambi Ramia, Myna fame also debut in Malayalam through this film,who also had played a vital role in this film.

Jayaram's love to Elephant is very popular. This is his third film along with elephant related story. He starred as an elephant owner in the previous two films like Anachandam and Pattabhishekam. Jayararam do himself is an elephant owner. He is a great lover of elephant and Pooram festivals. Through this film he represents the role of lovers of elephant. This film also point out the problem faced by the contractors to bring out the elephant for the festivals. Let's hope this will be again as super hit as before. 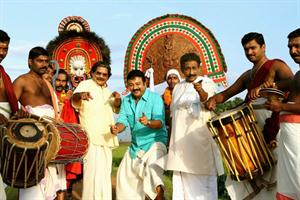 Thiruvambadi Alangat Malikakkar is a well known Christian family settled in Thrissur from the period of Shakthan Tampuran. They are the prominent family settled there and their love for elephant is popular. They handed down this from generation to generation. Thiruvambadi Mathan Tharakan and his son Thiruvambadi Thamban are the present generation of this family who follow their love to elephant and do the business with elephant. Now they are the biggest elephant contractors in south India and the uncle Kunjoonju also help them to do the business. The role of Thiruvamabdi Mathan Tarakan is performed by the Veteran Jagathy, while the role of Thiruvabadi Thamban performed by the family hero Jayaram. Nedumudi Venu plays the role of their uncle. Kunjoonju had done the business of leaf for the Elephant. The three of them are going to Sonpur elephant fair for bringing elephant for the Uthramkara temple annual festival. There they face some problem while returning back with the elephant. These are the background of the film Thiruvambadi Thamban.

The shooting of this film was mainly carried out in Bihar and Thrissur. They have copied the view of Gajamela in Bihar for this film. The first schedule of the movie started from Bihar. The film has faced so many problems due to the use of elephant with out the permission. This leads to delay of the shooting for several times. The shooting was approximately completed and later had to face another problem as actor Jagathy Sreekumar met an accident who played a key role in this film. It is said that they have avoided some scenes and change the story little bit to resolve the absence of Jagathy Sreekumar. Anyhow let's hope this also is a good thriller. The movie is likely to release this may itself. We can hope this film also bring a box office hit for family hero Jayaram.