Venus transit is a rare illusion of century which is visible on the earth on 6 June 2012. This may be the last such seen in our life time. After this event the rare vision of this illusion only available in 2117. The illusion Venus transit will begin at 22:09 UTC on 5 June 2012, and will finish at 04:49 UTC on 6 June. Previous Venus transit had been happened in 2004.The illusion can be visible in our state Kerala too.

What is Venus transit 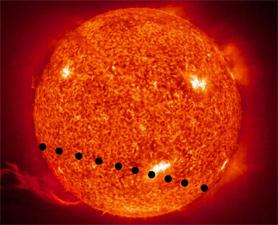 Venus transit is nothing but the movement of planet Venus between earth and Sun. Any of the obstacle hide a sky object from other sky object is normally called Transit. In Venus transit Venus has come as the obstacle between Sun and Earth. It is a rarest of predictable celestial phenomena that occur as pairs of eight year apart. The illusion happens only 4 times in a period of 243 years. During transit of Venus the planet Venus can able to see from Earth as a small black disk move along to face of Sun. Venus transit has the similarity as in solar eclipse by the moon, anyhow Venus transit seen very slow since it is much farther away from earth.

Transit of Venus has the historical importance in science because it leads to the realistic estimation of size of the solar system and also to estimate the distance between Sun and Earth. Observation of transit of 1639 by the scientist Jeremiah Horrocks and his friend William Crabtree by combining with Parallax principle provides an estimation of distance between Sun and earth accurately than any other method up to that time.

Research opportunities of the Venus transit 2012

Venus transit of 2012 has been opening many possibilities for the scientist in research about research of the solar system. Some of the research opportunities are listed here: 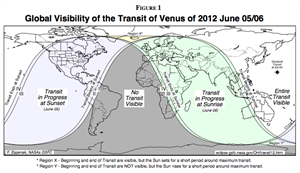 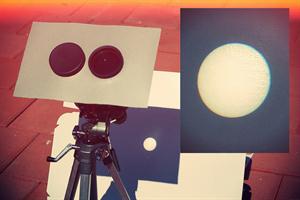 Venus transit can observe by different method. Even you can see by direct look, but it is not recommended due to unsafe for eye.

Hii Shafeer,
Thank you for your valuable information.