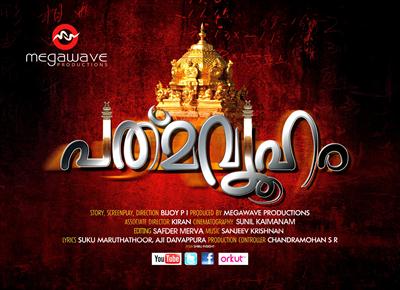 Upcoming Malayalam movie Padmavyooham will be a different theme in the history of Malayalam film industry. This movie will unveil the secrets of the treasures hidden at Sree Padmanabha Swami Temple Thiruvananthapuram(Trivadrum), the capital city of Kerala. The movie will explain the various facts about the Kingdom of Travancore. Sree Padmanabhaswami Temple is one of the major focus points of people in the all world after knowing the valuable treasure of Sree Pathmanabhaswami. The film is directed by P.A .Bijoy who has planned to make this film a variety entertainer. The movie Pathmavyooham 2012 is produced under the banner of Mega Wave Productions. The screenplay of the movie Pathmavyooham is handled by the director himself. The shooting of the movie were carried out at various locations at Allappy and Trivandrum. The camera is handled by Sunil Kaimanam. A creative team conducted an extensive research on the past of Travancore and Sree Pathmanabhaswami temple which had given lot of inputs in developing the story of the movie. 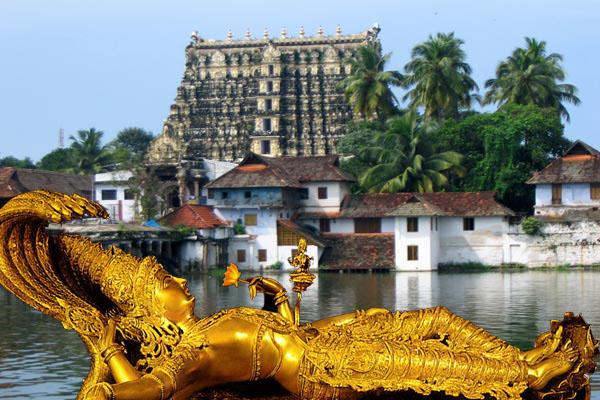 The name "Padmavyooham" is selected because of its meaning as Padmavyooham is also known as "Chakravyooham".In a simple way we can define the meaning of Chakravyooham as an arrangement consists of only one entrance and one exit. It is a technique used by Kuaravas in the great war Kurukshetra in order to defeat Abhimanyu. In this particular situation of the film, this meaning has a greater significance as it is a mysterious story related to kingdom of Travancore. The movie also explained the faith of King Marthandavarma who is a great visionary of Travancore. The director had an experience in direction from the short film Myth which was released on 2008. The movie Myth was also a mystery story related to the temple. For the film Pathmavyooham the statue of Lord Sree Pathmanabha was constructed by Ajayan.V.Kattugal. The dialogues of the movie were penned by Sherin Nooruddeen and P.A. Bejoy. The movie had a great importance to both music and background music. The songs are composed by Sanjeev Krishna and the lyrics have been penned by Suku Maruthathoor and Aji Daivappura. 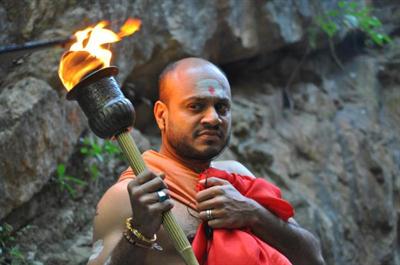 The story of the film was setup by Bijoy only after a long research of 6 years. The film was actually a 90 minutes long film and which is an extended re-telling of his first film Myth. But unlike the film Myth, the film Pathmavyoham should have a positive ending. The story of the movie Pathmavyooham revolves around the murder of a journalist who comes to Travancore for researching the treasure hidden at Sree Pathmanabhaswami temple. But during his research on the valuables of temple he was murdered. That leads to major discussions on society and ultimately a police officer known as Adhithya varma was appointed to investigate the murder of that journalist. Adithya Varma was one of the members of present generation of King Marthanda Varma. During the progress of investigation he could go through many secrets related to temple. The character Adhithya varma was carried out by Nobi Tharyan. The film is first attempt of Mega wave Productions. Attingal palace was one of the major location sites of this movie. The movie will be technologically a good attempt in Malayalam movie industry. The film Pathmavyooham will be definitely attracted by all type of viewers as it different in many ways from other films. The editing of the movie was done by Safdar Merva. The movie is not just related to the murder of a single research man. A serious of murders is taking place relating to the treasures inside the temple. For creating a temple atmosphere, the crews of this movie worked a lot. When we look around the history of the Travancore Kingdome, the vision of Marthanda Varma was extraordinary to protect the nation and his kingdom from the army of tipu Sulthan. 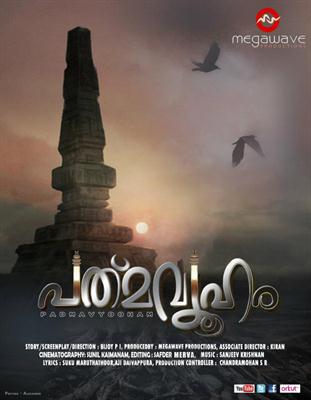 The art director Ajayan had a great experience in working with legend directors of India, Maniratnam and Jyaraj. The expectations of the film is increasing mainly because, the technical and art works were done nicely in this film. The statue made by Ajayan had a length of 18 feet's with good finishing. Another important highlight of Pathmavyooham is amazing animations. The animations for this film were done by DC-Animations which one of the best animation centre in India. The animation is done in order to understand how the Idol and sea are related. The movie Pathmavyooham will be definitely an awesome movie for the viewers. The specialties of the movies are extended to songs also as one of the song in the climax was sung by veteran singer Shankar Mahadevan. He sang the song starting with "Brahma Pravahame" which is quite amazing to hear. Other singers who sung the songs for this film are, Vidhu Prathap and Neha Nair. The complete film was shot with Red-One camera and which is provided from Red –Digital media. The director P.A.Bijoy was taken a good attempt to make the film technically stronger. The crews of Pathmavyooham are,

In this film the role of the Travancore King is carried out by Noby Tharian. He portrayed as an ordinary person who involves in his responsibility. A large row of actors are there in this film Pathmayooham, which includes, Amal Abraham, Sajeev Nair, Anchal Babu, Kiran, Aneesh Panickar, Fayis, Riyas, Vipin and Bhaskaran Nair etc. Most of the artists of this film are new comers' .At the same time the backgrounds of the movie were carried out by well experienced hands. Most of the works of the film were completed and the film is expected to be release on the last of June 2102. In all over the film Pathmavyooham is going through the startling moments, mysterious instants and pious duty of Travancore king.