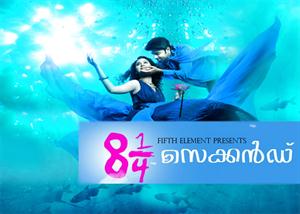 Love is the divine feel in the world. It is difficult to find one who does not love someone in their life. Love only nurtures in the mind of people who have the blessing of God. Romantic poets have described love as the fire burned in soul that never dies out. All the people have agreed love is the wonderful feeling in their life. Sometime love may be real but sometime it just an infatuation. Falling in love is not at all giant process and it is fast as blinking of eye. Ettekaal Second is an example of movie in this wise, which narrates love affair between two youngsters.

Ettekaal Second is an upcoming Malayalam movie from the director Kanakaraghavan. The movie will feature Govind Pathmasurya and Jimmy George in lead role. Suraj Venjaramoodu, Vijayaraghavan, P. Sreekumar, Manikandan, Swathi, Madhu, Devan, Urmila Unni, Bindhu Ramakrishnan, Anitha, Manka Mahesh, Ramya, Jijesh and Sethulakshmi are essaying other central roles of this movie. The movie would give a different experience for the viewers by the freshness in visualization. Tomi John has penned the story, script and screen play of the movie Ettekal second which portrays the aspect of love in a different format. Santhosh has scored the music for the lyrics penned by Rafeek Ahammad. Santhosh Babusenan has produced the movie under the banner of Mumbai and Los Angeles based movie company Fifth element. This is the first time they taken a movie in malayalam. 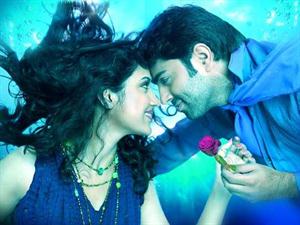 Productions houses are always thinking about new ideas to stay ahead in the platform where exist immense competition. Such an idea makes the movie Ettekaal Second internationally notable even before release. The movie Ettekal Second featuring by a song 'Katharamam Mizhi' which is taken shot entirely under water. This is the first time in malayalam movie history a song has been shot in underwater and making wave. The song of five-and-a-half minute is the longest song which shot at underwater in any movie industry. The song was filmed using latest equipment for underwater photography. Pathmasurya and Jimmy George do really deserve appreciation for being a part of the challenging shot.

Govind Pathmasurya is an upcoming star in malayalam movie who had already got critical acclimation acting in the movie Adayalangal from M. G. Shashi. Jimmy Geroge who essayed a notable role in E Aduthalkalath has been casted in female lead in the movie Ettekal Second. The movie posters reveals the chemistry between the lead actors.

Cast and crew of the movie Ettekal Second 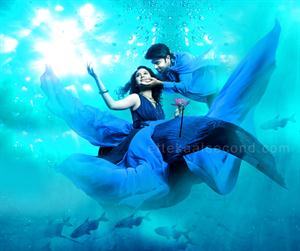 The movie Ettekal Second portrays love through different viewpoints. Sandheep is a smart young fellow the son of driver Shivaraman who worked in the house of millionaire Menon. Sandheep has finished his studies who is now in search for a job. He used to help his father in job. Once he ought to go for a journey as the substitute for his father. There he meets Nivedhidha, grand daughter of Menon which eventfully turns his life. She worked as a sound engineer in Mumbai and comes down to record ambient sound of hills of Kerala. Sandheep was not much attracted towards her at the first look as she is was a modern girl. But later he fall in love with her, which took only eight and quarter second to emerging love. Nivedhidha has a jealous fiancé Mithun who doesn't like their love and create problems in it. The movie progress by depicting the pure love story between them.

The movie was shoot in Trivandrum, and nearby places. It would be a different experience for the viewers with magical visual presentation. Let's wait for the visual jugglery that hides in this movie by the director.