In contemporary social system news papers and media do have an important place in the society. The movie Breaking News gazes into the burning issues and problems created by current news channels. In recent days lots of news channels exist which create immense competition among themselves. All channels compete with each other to get to the first place by giving breaking news.Sometimes those stories which had been cooked up without proper evidence and source have destroyed the life of innocent people. News channels do tag the person as the culprit even though they might be innocent which gives them a negative image before the society. The movie Breaking News focus on such a message where life is more than that of news along with portraying contemporary life views.

Breaking News is directed by debutant Sudheer Ambalappad who has a lot of experience in advertising field. He already has shown his mettle being the director of popular reality shows Patturumal and Street Light. From the words of Sudheer the movie 'Breaking news 'would keep a distance away from usual new generation movies by the unique theme it handles. The movie features Vineeth and Kavya Madhavan in lead roles. The story of this movie is from the director himself while the screenplay has been done by G. Kishore. Mohan Sithara has scored the music for the lyrics of Premadas Iruvalloor. Ranjith Kumar has produced the movie under the banner News value productions limited.

Kavyamadhavan and Vineeth have been essaying the lead role of the movie Breaking News after the movie Banaras. The true chemistry between the two actors would reflects on the screen which will be a rainbow view for the viewers. Thilakan, Devan, Mamukkoya, Anoop Chandran, Lakshmi Sharma, Mythili, Lena, Thesnikhan and Subi have been casted in other major roles. 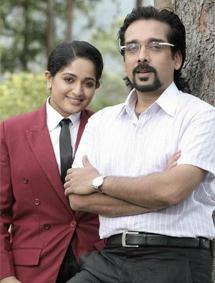 The movie Breaking News is portraying the tale of people whose life is affected by contemporary news channels. Nayana is a student of Munnar college hotel management while Deepak is working as a teacher in the college. Nayana meets Sneha during a train journey which eventually brings disaster in her life. Even though the tragedy occurred in the life of Sneha,the news channels placed Nayana in the spot which eventually destroys her life. The movie Breaking News advances to the next stage with incidents connected to the life of Nayana. Kavya Madhavan is doing the role of Nayana while Vineeth comes as Deepak. Mythili is casted in the role of Sneha.

Kavya Madhavan who is donning a role of a hotel management student is much thrilled about the role. The shooting of the movie has been progressing in Munnar, Kozhikkode and nearby places. The movie would hit theatres this year itself.