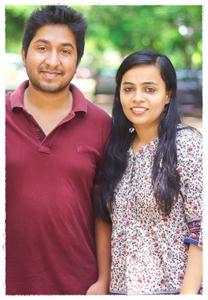 Vinneth Sreenivasan while planning to celebrate the 100 successful days run of his majestic movie Thattathin Marayathu, the actor is sprinting up to welcome his lady lover to his life. He will tie knot with Divya Narayanan and engineer from Chennai born to G Narayanan and Usha Narayanan from Kamakoti Nagar, Pallikaranai, Chennai.

Most interestingly, Vineeth and Divya were known each other from their college. Divya who studies junior to Vineeth hails is really a native of Thalassery in Kannur. The marriage will take place on 18th October 2012 at Dinesh auditorium in Kannur between 10.30 AM to 11.00 AM.

Vineeth, the son of renowned malayalam actor Sreenivasan is a well accepted personality who has large admirers around the globe. Stepping in the magical world of movies, Vineeth showed his brilliance behind the silver screen by singing melodious songs which had created waves among the youngsters.

Vineeth is much responsible for inspiring the young generation through his music which had a captivating feel. Most of his songs were noted and become a part of the generations.

After giving his lips for the heroes on screen, Vineeth tried his skill in acting too. His performances as an actor in malayalam movies like Cycle (2008), Makante Achan (2009), Traffic and Chapakurussu(2011) and Padmasree Bharat Dr Saroj Kumar (2012) was highly praised. In 2010 Vineeth made his directorial debut with Malarvadi Arts Club introducing few young talents to malayalam movie industry.

In 2012, Vineeth came forward with his second movie 'Thattathin Marayathu' already declared a block buster is still running forward carrying the 100 days successful flag. The movie was kept close to hearts by people living not only in Kerala but also those malayalees who are staying in United States, Gulf countries and others too.