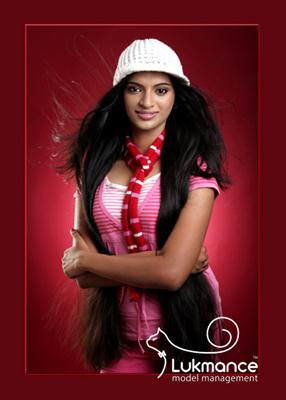 Modeling would be the dream of those who wish to move forward in the glamorous world with handful of assignments. It also has turned to be the stepping stone for many to try their luck in movies too. Walking through the ramp would be the best opportunity for them to get their face locked for those film makers who plans to cast new comers in their movie.

Many young actors who are donning Hollywood and bollywood movie industry have begun their career keeping their legs long in ramps. Malayalam movie industry is also blessed with a handful of actors who have made their dreams after getting noticed through modeling. Adding one more to it would be Amalda Liz Joseph, a known model who is making her debut through 'Arakkal Bevi', an upcoming malayalam movie which reveals the story of Arakkal Bevi who do have chronicles written about her bravery and boldness.

Amalda Liz Joseph born at Wayanad to parents dedicated to teaching profession did choose modeling as her career, a profession which was not being accepted by her dear and near ones. But her strong will to face consequences and challenges helped her to make a safe landing and also becoming a popular figure in some of the prestigious fashion shows. While studying for her third year in engineering, Amalda had participated in Miss Kerala 2009 which made her to reach the finals and also winning Miss Beautiful Hair award too.

After completing her graduation, Amalda dedicated herself for modeling and become a top contender for South Indian Model Hunt held in 2010 where she was crowned as Miss Confident Face. Amalda had been a part of a television show as anchor for Youth Carnival telecast on Kairali TV. She also was bonded with high modeling assignments including for being a part of photo shoots for Kingfisher Calender, Fabindia and Linen Burgoyne.

22 year old Amalda rolling high on her boldness has become the only representative from kerala to be a part of those fashion shows held at Jaipur and Chennai. Amalda who had already made a strong hold in modeling made her presence in Kochi International Fashion Week too.
Adding another feather to her cap, Amalda will make her debut play the lead character in upcoming history based malayalam movie ' Arakkal Beevi' directed by Shaji Pattanam. Donning the title character as Arakkal Aysha Beevi, Amalda eyes of making a strong hold by giving life to a muslim woman, the much acclaimed female ruler who had been a part of chronicles through her bravery and boldness.

Amalda will also be seen as the anchor of a reality show which can also be considered as another feat. She boost of having artistic talent in veins with her father who had experimented in drama and writing. Amalda is who is well trained in Bharatanatyam is well set to make a new beginning in malayalam movie industry.