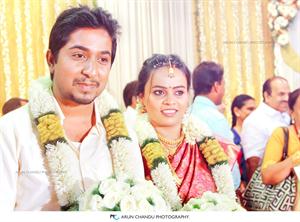 After keeping his true love towards Divya Narayanan under hush, actor-director Vineeth Sreenivasan opened his mind before his parents which ended up with the marriage held at Dinesh Auditorium in Kannur on 18th October 2012 which was attended by eminent celebrities. Son of actor Sreenivasan, Vineeth met Divya in the college music club while studying at the KCG College of Technology in Chennai.

Divya, daughter of G Narayanan and Usha hails from Kannur but currently resides in Chennai. As the relatives of both families do belong to Kannur district, the marriage was held here for convenience. The newly married couple would host a grand reception for the malayalam movie fraternity is being organized on 20th October at Gokulam Convention Centre Ernakulam. 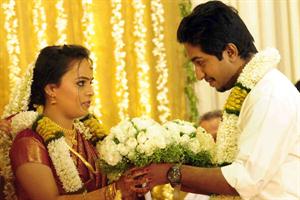 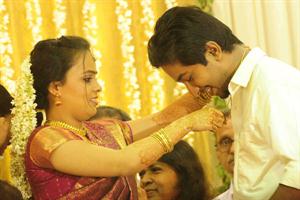 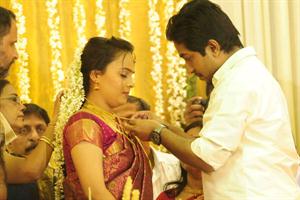 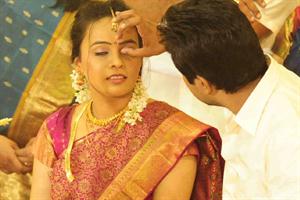 Vineeth Sreenivasan, who is having a versatile personality, had made his entry as a playback singer. He also proved his caliber as a lyricist and also an actor through his presence in movies like "Cycle", "Makante Achan", "Traffic", "Chapakurussu" and "Padmashree Bharat Dr Sarojkumar." But no one could stop the passion of the Vineeth who tried his experience behind the camera as director.

After a storming entry as director with Malarvadi Arts Club, Vineeth succeeded in making a blockbuster with 'Thattathin Marayathu' pulling up graph as proved director.

The newly married couple will spend their honeymoon at Mauritius which is planned for next month.

Read about Dracula 2012 malayalam movie, a 3D magic from Vinayan shot at Romania. This is the third Malayalam film which comes in 3D format. Sudheer plays the leading role in this film. The shooting of this film is carried out in the Bran Castle in Romania. This film is distributed in the banner of Akash films.