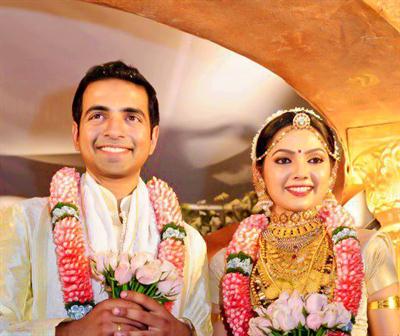 It is much sure that even a little news related to celebrities will bring a huge buzz and grab attention as people cannot resists their curiosity to some extent. If the news comes from the Cine world, no doubt people pool into deep in the hunt for more updates. There are very less movie artists in malayalam who had kept themselves free from gossips and romours. Samvritha Sunil is such an actress who had been entered the minds of people for her exotic style of acting and behaviour.

While '101 Weddings', her upcoming movie is ready to hit theatres, actress Samvritha Sunil is gearing up for her personal 'wedding' which is all set to take place on 1st November 2012 at Vasava Cliff house in Kannur. Samvritha will share her rest of the life with Akhil Jayarajan, a software engineer who works in California, USA. Akhil who hails from Chevarambalam in Kozhikode, is the son of Perumpadappil Jayarajan and Preetha. The marriage to be held according to the traditional Hindu ceremony will be graced by family members, friends and very close associates from the film world.


The marriage of Samvritha Sunil will be the next big wedding after Vineeth Sreenivasan who married Divya Narayanan a couple of weeks ago. On 6th November the actress will host a reception for the malayalam film celebrities at Le Meridien hotel at Kochi. After the marriage and reception schedules, Samvritha will fly to California along with Akhil in the third week of November. The actress has yet decided whether to continue acting after the marriage. Samvritha's latest entry 'Ayalum Njanum Thammil', along with Prithviraj has already made a decent start giving positive responses from theatres.

Born to Kannur based hotelier K.P. Sunil and Sadhana Sunil, Samvritha made her film entry with Lal Jose's Rasikan. Samvritha who has around 40 movies in her credit had given remarkable roles in 'Chocolate', 'Achanurangatha Veedu', 'Arabikatha', 'Neelathamara', 'Manikyakallu', 'Cocktail', 'Diamond Necklace', 'Mallu Singh', 'Happy Husbands' and 'Arike'.

It was really a moment of sharing emotions while wrapping up the shooting of Ayalum Njanum Thammil for director Lal Jose and Samvritha Sunil. Lal Jose had given the young talent a dream debut and her silver screen appearance ends with another venture of the ace director.

While extending our wishes for a happy married life, as all malayalees we too hope to see the actress back on screen in the near future.