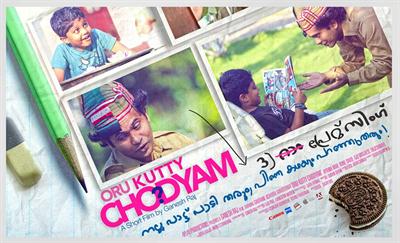 It is much interesting to know the deep love of the young generation towards the fascinating world of movies which has made them to give their contribution either as an actor or one behind the camera. The year 2012 was too encouraging in means of releasing more than 100 movies solely speaking malayalam. With a passion to enter the league of biggies, a handful of youngsters are struggling hard day and night to bring their best for a vivid future.

Experimentation done with short films is growing enormously as the young folks are ready to sacrifice their time for creative thoughts. 'Oru Kutty Chodyam' would be such a film which would have come upon experience rather than experimentation.

Ganesh Raj who worked as an associate with Vineeth Srenivasan for the blockbuster movie Thattathin Marayathu gearing up with a 25 minutes length adventurous comedy short film 'Oru Kutty Chodyam'.

Ganesh who has a bright track record with short films has raised up his position to the next extend winning the first place in a Short Film contest held a year ago. So his long experience with camera have landed him to give flesh and bone to a theme which roles around a 5 year old young kid 'Akku' who carries lot of questions which was spinning in his mind for a long period.

As his young mind bleeds, he started asking those questions and was eager to find answers for it. He aired those doubts to his father (Dr.Rone David) and mother (Aparna Nair), and even to his best friend Prem Singh (Aju Varghese).

This 25 minutes length adventurous short film packed with comedy will be an eye candy for those interested in encouraging novel ideas. Already the trailer of this short film is getting wide response from the audience. Gautham, Achyuth, Dr. Rone David, Aparna Nair, Aju Varghese, Ramakrishnan and Rajeshwari will donning the major roles in this short film. Ganesh Raj himself has the story and screenplay.

The posters of the film are designed by Arun Chandu which truly carries the spirit of a 'master's weaving skill'. So keep on counting days to get the first taste of 'Oru Kutty Chodyam' and let us see what Ganesh Raj and his team has stored for us.