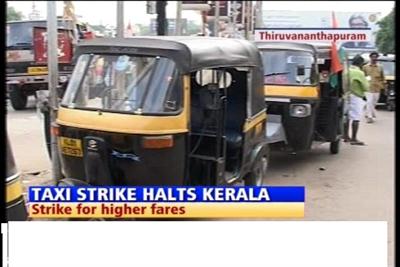 The state of kerala is facing some serious problems from mid-day when Taxis and Autorickshaws went to strike in order to in order to increase the fare upto double the percentage. The autorickshaws which used to be so busy along the streets of railway station and airports are today pulling their services off because of the strike and bandh for their call. The call for the strike is to justify the fare to be introduced in the state followed by a long tiff against the Government. The ultimatum would be to hike it by 50 percent so that the natural duty could start as early as possible.

The stranded passengers at Trivandrum railway station were facing the tough time of all this harassment. Meanwhile, auto rickshaws even made the case worst for the members. The Airport authorities of Kerala state said that, this naturally occurs every 1 month but soon gets dissolved because of no such official announcements. However this time even the case looks the same and would be dissolved within some prime time. The passengers shall have to accommodate their own arrangements in order to reach home. On the other hand, the Kerala Ministry is looking into the case of hiking the prices by 10 to 20 percent, but not directly by 50 percentage as demanded by the taxi drivers and auto rickshaws.

At the Trivandrum Railways station, the crowd seems unstoppable and with this strike, things looks even more complicated. People are voicing their opinions too harsh on this case. Stranded passengers replied that they would rather see this as political imbalance and no betterment look for the people there. It seems things could go wrong, if results are not soon declared.

Voice of Drivers and Auto rickshaws over the fare hike

The union voice for all the auto rickshaws and drivers of taxi vehicles say that the fare hike is to take into count the increasing subsidies and prices that are rising above the limit, and people need to hike their fares in order to comply with those. With this regard, the team of a union has taken into the meeting at the Kerala office today and are looking to resolve the issue as soon as possible. If these conditions are levied, a common people would have to shell 50% more price than the usual running now.

According to the revision of prices to be brought into account, Rs.15 would be charged per kilometre instead of Rs.12 and taxi drivers could charge a hefty Rs.150 per 5 kilometres from Airport as the current running price is Rs.100. The reactions of the customers seems obvious that they are quite unhappy with the things and bandh protests from the drivers and auto rickshaws.