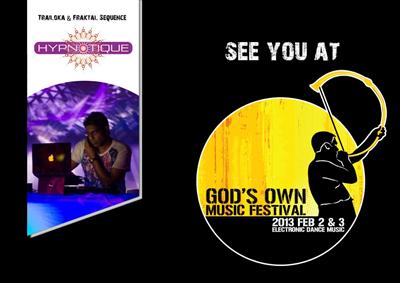 Kochi is the only place in Kerala where people live in the present, adopting various cultures and conducts. The lifestyle of Kochi is totally adaptable for anyone who makes a visit to the city. Known as a busy city, Kochi has been the venue for various major international and national events. After being the host for the Miss Kerala and Miss South Kerala Pageant, the city is again grabbing global attention with God's Own Music Festival or GOM Festivial which is slated to be conducted on 2 and 3 February 2013.

For the first time in history, Kerala is hosting an electronic dance music festival which is being organized by Events Entertainment People, a Kochi based event management group. It would be unique chance for the best DJs in the country to gather together for an outing in Kochi performing live before hundreds of music enthusiasts.

The music lovers to be gathered in Kochi on the Music Festival from around the world, is expected to witness the live concert of best DJ's including special performance by Baiju Dharmajan, Praveen Achary and DJ Savyo. Most of the Dj's represents Banglore and Kochi which is the home palace of the most excellent Dj's in the country.

The festival which is slated for 2 and 3 of February will have 2 days of unlimited dance and music lead by music jockeys. The tickets which are scheduled in two categories include Rs 1,500 and 1,000.

For those interested to watch the show for two days can enjoy it paying Rs 1,500 which includes access to two free bears while those want to spend an evening has to pay Rs 1,000 in which a free beer is included. Those interested to enjoy the days can reserve the tickets by booking it sending an email to gomfestival at gmail dot com. This Music Festival would mark an exclusive chance to meet your favourite international and national Dj's performing live before you.

Dance Music festivals in various formats had become top favourite among people and found success around the globe which make the organizers to conduct it in new venues. After running success on the shoulders of successful music festivals like October Fest, Sunburn, Go Madras, Bacardi NH7, and now it is the turn of God's Own Music Festival or GOM Festival to rock Kerala where viewers will have a new experience. Here is the list of your favourite Dj's who are gearing up to rain Kochi with music.