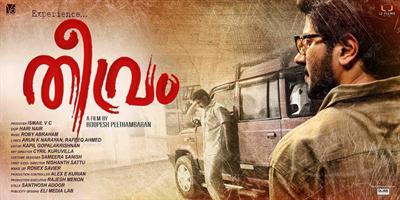 It is the season of revival in the Malayalam film industry with fresh and experimental movies getting well reception at the box office. It is the best time for the young actors and technicians who are aspiring to make an entry in films. Dulquer Salmaan is the most active among the young actors in the industry who managed to fill the giant shoes of hope even with his first movie 'Second Show'. Ustad Hotel followed by Second Show also provides great opportunities to Dulquer Salmaan to prove his real talent.

The secret of success of Dulquer Salmaan is none other than his selection of movies. Dulquer Salmaan always pays much attention to select different roles and movies. Both Second Show and Ustad Hotel are full fledged experimental movies. The characters played by Dulqer Salmaan in both Second Show and Ustad hotel were entirely different. So the movie buffs have much expectations about his upcoming projects. It was reported that Theevram will be an unconventional movie with Dulquer playing a different character.

Theevram written and directed by Roopesh Peethambaran has fresh faces including Anu mohan, Vishnu Raghav and Riya Saira(22 Female Kottayam) sharing the screen space along with Dulquer Salmaan. Veteran actors like Sreenivasan and Janardhanan will don supporting roles. The cinematography of the movie is handled by Hari Nair while editing done by Kapil Gopalakrishnan. For the lyrics of Arun.K.Narayan and Rafeeq Ahammad, the music was created by Roby Abraham. Theevram produced by V.C Ismail under the banner of VCI movie is being distributed by Lal Jose under the banner of L.J films.

As the movie started,dedication is given to Director's late mother, Director Bhadran and Dir.Anwar Rasheed his friends and to the almighty. Theevram is basically an action thriller. The whole movie deals with a revenge story. It can be considered as part of the new revival in the Malayalam film industry. The movie can be categorized to the group of experimental movies such as Second Show, 22 Female Kottayam, Cocktail and Ea Adutha Kalath. Most of the cast and crew of Theevram are comparatively young and fresh. We can feel rays of freshness throughout the movie.

Harshavardhan,played by Dulquer Salmaan was a M.B.B.S Student . He dropped M.B.B.S and aspiring to become a music director in the film industry. The main routine of Harsha is to approach various film Directors for a chance to prove his talent. He considers passion than profession.Dr. Roy played by Anu Mohan and his would be played by 22 Female Kottayam Riya Saira are the best friend of Dulquer Salmaan. Meanwhile Harsha vardhanan marry his lover Maya(Shikha Nair)in hesitation due to certain malpractices played by her father and relatives. Maya got a job in a call center. Maya questions the unsocial behaviour of her office driver Raghavan.

The clash between Maya and Raghavan creates crucial incidents in the story. Maya is brutally raped and killed by Raghavan during one night. Harsha was in Madras that time as part of his work as a music director. The police arrested Raghavan. But the judiciary failed to give correct justice to Harsha. Harsha and his friends planning to take revenge against Raghavan since the court failed to give it. The rest of the story deals with the contradiction between Harsha and the legal system.

Narrative pattern is the spine of Dulquer Salmaan's latest flick Theevram. Story wise Theevram has nothing much to offer. Certain incidents in the story seem to be childish. However Dulquer Salmaan and Roopesh Peethambaran are able to impress the audience. Both Dulquer Salmaan and Roopesh Peethambaran had done a good job. Both of them had tried their level best to give a different experience. We can feel the experimenting spirit in most of the scenes. The color tone of the movie is the ample evidence of that. Roopesh had used a grey blue color tone for the film .It is very interesting experience. The different color pattern easily conveys the mood of the film. Certain dialogues in the movie are striking.

Some dialogues remind certain recent social issues to the audience Charactarisation of Dulquer Salmaan, Sreenivasan and Vinay Fort are remarkable. The screenplay of the movie is good. The mood of the movie is somewhat different. Theevram is a full fledged experimental film. It can label as a youth oriented action thriller. Theevram shares the pulse and passion of the current youth on the screen. Different treatment is the striking factor of the movie.

Performance of other actors

Sreenivasan- Vinay Fort chemistry has done well in the onscreen. The combination scenes of Sreenivasn and Viny Fort created certain humorous scenes in the movie. Police officer Ramachandran may best of Vinay Fort. Sreenivasan is back again as a coward and brilliant Police officer. The veteran actor had done a fantastic job. Both Anu Mohan and Vishnu Raghav did justice to their roles. Veteran actors Janardhanan and P.Sreekumar also excel in their supporting roles. Riya saira once again proves her talent after her much acclaimed Tissa of 22 Female Kottayam. Debutant Shikha Nair failed to impress the audience.

However Roopesh Peethamban might not have considered serious about the story of the movie. The story has not much stuff. The director's primary focus is to the different narrative pattern. Story of Theevram seems to be conventional and childish in some parts. The first half of the movie is really thrilling. Roopesh had done a good job in the first half. Second half of the movie is terribly lagging somewhere. Certain scenes in the movie are totally unnecessary.

Director also failed to cast a good pair to Dulquer Salmaan. Debutant Shikha Nair is terribly disappointing with her performance as the female lead.

Theevram contribute a brilliant director to the Malayalam film industry. His narrative pattern is brilliant. Screenplay is good in parts. Certain dialogues are remarkable. However he had grab the maximum from from Dulquer Salmaan, Sreenivasn and Vinay fort. The scenes of these three actors have enough claps in the theatre. The sincere attempt of Roopesh should be appreciated. The soundtrack from Roby Abraham Arun.k.Narayan and Rafeeq Ahammad tio are apt to the situation. The cute romantic number Nin Nizhalariyaathe………. deserves a special mention. The grey blue color tone creates a different mood to the film. Action sequences of Dulquer in the climax portion created electrifying experience in theter. The Cinematography by Hari Nair is striking. As usual Sameera Saneesh once again attracted audience with his caliber as a costume designer.

Theevram has certain surprising elements. Promising directors appear in cameo roles in Theevram. The young actor Unni Mukundan also has a guest appearance in the movie. Directors such as Aashiq Abu and Martin Prakkatt appear cameo roles in the movie.

Theevram is completely an experimental film. It will definitely create new waves in Malayalm film industry. Both Roopesh Peethambaran and Dulquer Salmaan had done a remarkable job. We can feel the team spirit throughout the movie. This sincere attempt of Dulquer Salmaan and Roopesh Peethambaran should be appreciated. If you are in search of different movie experience then go and watch this film. Despite certain loopholes in the story and the dragging second half the movie is completely experimental. Once again hats off to Roopesh and Dulquer for their sincere effort.

Actress Shikha Nair makes her dream debut as heroine to Dulquar Salmaan for the upcoming malayalam movie Theevram directed by debutant Roopesh Peethambaran. Even before the shooting schedules, the movie became a buzz among young movie lovers for several reasons. Read more to know about Sikha Nair and her performance in Theevram.

Theevram (Extreme) malayalam movie release date and release theatres list are given here. The movie will reach cinemas on this Friday, 16th November. The film is releasing in more than 60 theatres in Kerala. Movie buffs welcomed it's trailer and songs with applause. Malayalam movie industry is eagerly waiting for Dulquer's new experiment. Cast, crew,story and theater list of the movie Theevram is updated here with some highlights! Read on.