Malayalam film industry has grown to yet another stage with innovative and inventive things happening both in the front and back of the camera. Even though visual media and social networking sites are active in delivering news reports on the happening in the malayalam industry, people in Kerala do keep high regard on the news covered by their dearest print publications. Among the different periodicals and magazines which exclusively carry updated stories on latest malayalam films, the presence of 'Nana' is highly appreciated. 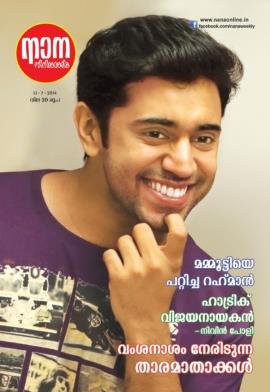 More than a film magazine, Nana has become a part of the daily life of malayali reading community for more than 4 decades. Staring publishing in 1972, Nana, has set a trend in making people of Kerala to channelize their minds to update with news about the happenings in the film industry. Being the handheld entertainer for the movie lovers, this film weekly provides a 360÷ view on the malayalam film world. The best part of this periodical is the highly reliable news bits which can bring excitement in the readers.

Widely read by malayalis around the globe, Nana has played a vital role in popularizing the best in malayalam films. It has also spotted many new talents and brought them to the attention of aficionadas of excellence in this media. Packed with style and opulence, Nana targets the young reading community who wish to know more about their favourite stars.

With a core team of highly talented employess, each issue of this weekly is creamed with interesting stories about those films which are undergoing shoot. The highlight of Nana are location reports, film pooja stills, celebrity interviews, latest news bits from Kerala, star gossips, novel trends, upcoming releases, box office results and interesting facts about popular artists. The film weekly has dedicated ample space for delivering high notes about budding artists and gifted young talents who wish to make their name in the film world.

It is much fascinating to know that this magazine is highly praised by celebrities including the super stars. The captivating stories from the old movies give a nostalgic feel to the readers. Nana aims to bring to light the latest trends and information from the malayalam film industry mostly accessible to the common man.