Kerala Public Service Commission (Kerala PSC), one of the largest body which recruit personnel in government has taken all early steps to conduct the excise inspector exam (Category No: 260/2014). The PSC has published the date and syllabus of the Excise Inspector exam 2014. A comprehensive awareness about the detailed syllabus before the commencement of exam can build up the confidence level in the candidate and enable them to prepare well before the scheduled time. The excise inspector exam is scheduled to conduct on 2nd August (Saturday) 2014 from 1.30 PM to 3.15 PM at various centres in Kerala. Candidates can download the admission tickets fro 19th July onwards through their one time registration profile from the website www.keralapsc.gov.in. 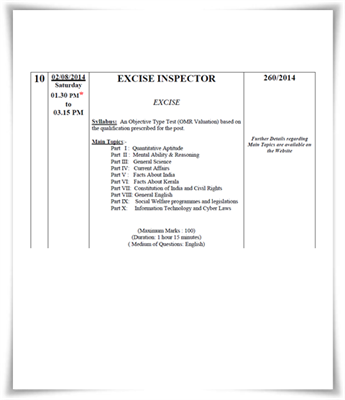 The Kerala PSC excise inspector preliminarily test consists of an objective type exam (OMR Valuation) based on the qualification prescribed for the post. The exam will be conducted on 2nd August 2014 for Category No: 260/2014 to fill various vacancies. With a scale pay of 16180-29180, the number of vacancies are not yet calculated. The duration of exam will be 1.45 hours which include the verification of documents. The list of selected candidates published by the Commission shall remain in force for a minimum period of one year.

With exam duration of 1 hour 15 minutes, questions of maximum marks 100 will be given for the candidates. As the time for preparation and the date of exam has a gap of less than 1 month, candidates shall undergo hardcore training which include self learning and crash courses conducted by different coaching institutes. The syllabus of the Excise Inspector exam 2014 would give a clear knowledge about the topics to be covered along with the groundwork.

Here is the syllabus of the Excise Inspector 2014 exam as notified in the Kerala PSC website. The syllabus is divided into 8 parts with topics such as Quantitative Aptitude, Mental Ability and Test of Reasoning, General Science, Current Affairs, Facts about Kerala, Facts about India, Constitution of India, General English, Social Welfare Schemes & Measures, and Information Technology & Cyber Laws are included.

A programmed selection process is being followed in all the exams which are being conducted by the Kerala Public Service Commission. According to this method, a preliminary objective type exam (OMR Valuation) will be conducted during the first phase of the exam. After the initial test slated on 2nd August 2014 gets completed, a shortlist will be prepared. Those candidates who find their names in the short list have to undergo the physical test which will be held during December 2014 – February 2015. During the later stage of selection, those who qualify in the physical exams will be invited to attend the interview. After the final assessment and discussion, the decisive rank list will be prepared and it gets published in the Kerala PSC website by the 2nd quarter of 2015.

As time is a big factor, a serious approach in needed in the preparation of the exam. Like all other competitive exams, a high level systematic learning and dedicated mind is needed to score high marks and get into the top rank spot, candidates should give complete devotion to the studies. Comparing with other exams, as both physical and mental ability are being tested for the current post, candidates must also devote much time in developing a well studded body and also building self confidence. It is very important to have a well verse with the previous question papers and online mock tests. As the preliminarily test is set in a multiple choice pattern, online tests can bring extra confidence much prior to the exam. So work well, strive hard to overcome the challenging exam and be the winner.