Amrita TV, known for its excellence in delivering innovative programs is gearing up to telecast yet another creative show for the thinking generation. The chat show titled 'Malayali Durbar' (MD) hosted by popular actor Maniyan Pillai Raju will be launched on 19th July 2014 will be telecast every Saturday from 8.00 pm – 9.00 pm. Touted as a lifestyle programs with discussion on topical issues, each episode will be graced by celebrities from different walks of life.

Unlike other chats shows featuring invited guests and discussing on social and political issues, 'Malayali Durbar' with a novel touch has something special to serve the malayali audience. Maniyan Pillai Raju, better known as an actor and producer has been making his screen presence for the past 3 decades. 'Malayali Durbar' has nothing to do with artificiality, but it makes the invited guests to think before delivering their thoughts before the camera. 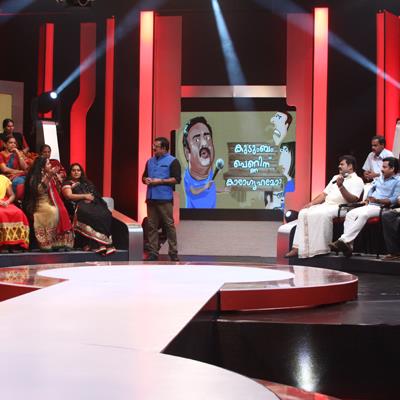 Some of the though provoking questions include:-
• How do mothers deal with the aspirations of their teenage daughters when they come into disagreement with their own beliefs?
• Which are the areas and what are the degrees to which working spouses should concur with each other's judgments on matters?
• Is the growing lavishness on weddings a necessary evil in today's social scenario?
• How about an inquest of a divorce, 10 years later—do things look different in retrospect for the parted wives?

These are some of the issues tackled in 'Malayali Durbar' which will be joined by celebrity couples, real life parents, spouses, children and siblings. From the words of Shyamaprasad, the chief creative head of Amrita TV, 'Malayali Durbar' will be a unusual program which is being presented in a unique style with an issue relevant to every family being discussed. Pumped with ultimate energy, the show will super-focus tussle between two opposing viewpoints.

The format of the show envisages formation of opinion groups with male celebrity teaming up with the husbands while the female celebrity joins hands with the wives. 'Malayali Durbar' is produced by Supa Sudhakaran who has produced and directed many reality shows. Every episode will feature nearly 50-odd participants. So get ready to watch a discussion of some serious issues which can spark your internal thoughts.

Amrita TV Let's Dance reality show season 3 (2014) for couples is entering its new season. This reality show for dancing in pairs with the support of music is being set for pairs in the 15-30 age groups. After the grand success of 'Super Dancer' and 'Super Dancer Junior' which has nurtured individual dancing talent, the new show aiming to encourage pairs to showcase their skills will be supported by professional choreographers who would work along with each team.