The Parthasarathy Temple is located at Aranmula on the banks of River Pampa, of Shabarimala fame, in the Pathanamthitta district of central Kerala. Right from the time immemorial, the locals have been bringing the Nirapara, which has grains or rice in specific units, as offers to the presiding deity Lord Shri Krishna. The landlords and peasants from the nearby locality have been bringing a part of their bounty to the temple to express their gratitude for the God. Usually, the Nirapara is brought to the Aranmula temple in Palliyodams or the holy snake boats. The oarsmen of these Palliyodams sing special songs in praise of the presiding deity. The people of this region call these songs as Vanchi Pattu. These songs have a special melody that picks up the rhythm of the oars propelling the snake boats forward. The bounties are shored up at the shore leading to the temple by 8 O' Clock every morning during the above mentioned period. The raw materials shored up at the temple are used for making the sumptuous meal in time for serving to the waiting devotees. The feast is served immediately after the afternoon Pooja. 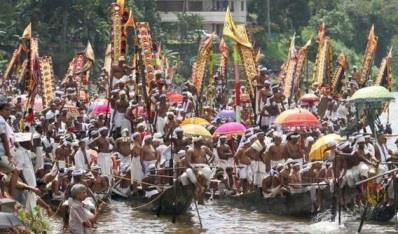 The oarsmen offer the Nirapara to the presiding deity at the Nadappanthal in front of the golden mast. Immediately after handing over the Nirapara, the batch of oarsmen goes around the temple chanting Krishna Bhajans or Vanchi Pattu. As a result of this, the whole premise of the temple gets charged up with the rhythmic Vanchi Pattu. These snake boats normally participate in the Uthrattathi Vallamkali on the River Pampa. In this year, it was on August 31, 2015. This is an age-old custom wherein the local peasants and landlords thank the presiding deity for giving the nice harvest every year. The representatives from local area bring the grains and rice to the temple and help the priests there to cook food for a large number of people.

There would be a grand feast for the people from that area and other visitors to the temple on the birthday of Lord Shri Krishna or Ashtami Rohini. Every year over one lakh people attend this grand feast. In this year, this grand feast falls on September 5, 2015. Almost all the palliyodams that brought the Nirapara to the temple are expected to participate in this Valla Sadhya. Usually, the feast is sumptuous as testified by the people who had participated in the past. The served sadhya comes with a variety of dishes. During the other days, the feast is jointly sponsored by Palliyoda Seva Sangham and Travancore Devaswom Board. People visiting the temple would be served with delicious food for a period of 80 days. In this year, it started on July 15, 2015 and would continue up to the second week of October 2015. People who savoured the tasty cuisines served swear to come back next time every time. This is because the taste of the feast takes longer time to wither away on the taste buds of people. 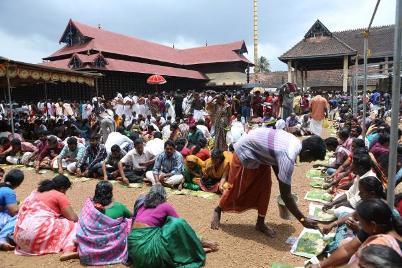 Usually, the two-and-a-half month-long community feast is attended by people from all walks of life. Even people from other faiths come and savour the traditional feast served at the temple premises. The tour operators make it a point to bring lots of foreigners and other off-Kerala tourists to this community feast to showcase the rituals followed at the temple. According to the statistics made available from reliable sources, the number of people participated was well over 100 thousand in the past few years. The participation of devotees and the tourists seem to be increasing with the passage of time. This stands as the testimony to the growing popularity of this ritual in the tourist circuit across the world.

Valla Sadhya has become a quite popular ritual amongst the people of the state. It falls normally during the festive season of Onam. Hence, it adds to the aura of the festivities observed in the state. This is a ritualistic feast given to the oarsmen who toil hard to bring the grains and rice to the Aranmula Parthasarathy temple. Normally, people bring the bounty of agricultural produce after the harvest by morning every day. The feast is usually served to the devotees and other visitors, immediately after the afternoon Pooja at the temple. The Nirapara consisting of grains and rice in special units is brought on specially made boats called the snake boats or Palliyodams. These palliyodams also participate in Uthrathadi Vallam Kali or Boat Race. In 2015, it took place on August 31, 2015. The community feeding usually lasts for 80 days every year. There would be a grand feast on the day of Ashtami Rohini or the birthday of Lord Shri Krishna. Usually, the community feast is served with a large number of traditional dishes. The sumptuous feast has been able to attract more number of people over a period of time. The number of participants has been increasing proportionately as the time passes.