In order to know why malayalees are so much interested in someone house in Kerala, you must know some background.

Pinarai Vijayan is the State Secretary of the Communist Party of India (Marxist). He recently modified and improved his house in Kerala. You may ask what is so interesting about it. Well, the reason Pinarayi Vijaya's house has become a controversial topic is, many people accuse that he has built a very huge house.

So, why people are so much concerned about the house of the state secretary of CPM ? Is it just because he is a political leader? I am sure there are many more political leaders in Kerala who has built (one or more) houses which is several times more expensive than Pinarayi's house. There are many business men and politician's in Kerala who built houses investing crores. Several leaders of the COngress party has built very huge houses and bungalows in Kerala and it never got so much news and media coverage.

The controversy about Pinarayi Vijayan's house started few years back. However, it got a lot more media coverage recently when an email started circulating with the picture of a huge house which is not actually his house. The photo of an NRI person's house was circulated in the email with the title saying "തൊഴിലാളി വര്‍ഗ നേതാവിന്‍റെ കൊച്ചു വീട്". 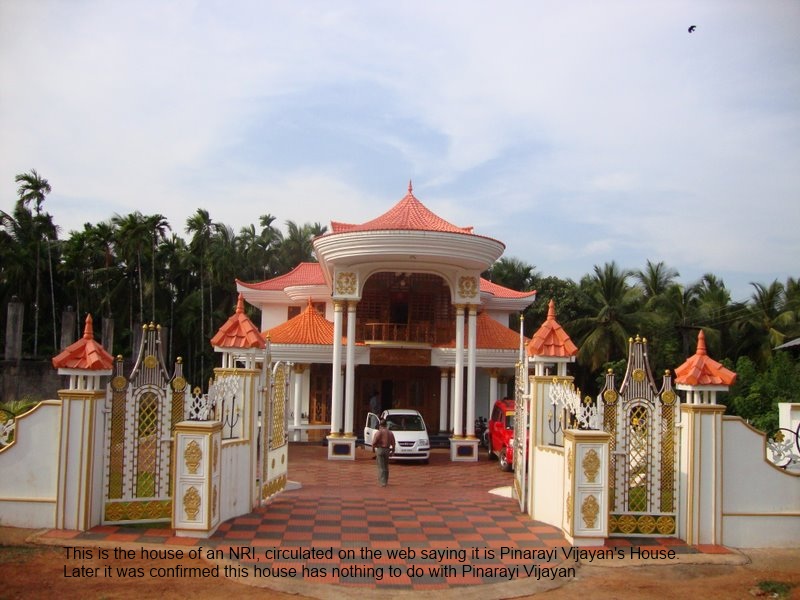 Since Pinarayi Vijayan's house was a controversial topic in the media for a long time and since many people have not seen the real picture of Pinarayi's house, most of the people who received the email believed that the picture is actually Pinarayi's house. Every one started forwarding the email to their friends and it eventually reached the hands of some CPM fans who registered the case with Cyber Crime Department in Kerala.

Cyber Crime Department in Kerala did a wonderful job and surprisingly they could locate the origin of the email chain. They traced it to an NRI working abroad who believed to have composed the original email by taking the photo from the Orkut profile of his friend. Later it was confirmed that the picture circulated as Pinarayi's houses was not really his house.

According to reports in various media, Pinarayi Vijayan's house is not a huge bungalow as shown in the picture above. There are no pictures of his real house available in internet yet. Even though media always accuse that his house is pretty big, media has failed to publish any proof.

The Janasakti weekly published a picture of a house in it's face page this week claiming it is the original house of Pinarayi Vijayan along with a cover story titled "ഇതു പിണറായിയുടെ വീടോ ?". 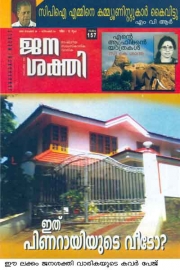 There is no information available at this time to confirm this claim. Even if the claim is true, the photo of the house in the picture does not even look close to the size of the picture circulated on the web. The picture published by Janashakti weekly does not look too big and is quote normal for a political leader who has to meet and accommodate many politicians regularly.

If the media can collect and publish the photos of the houses of all political leaders in Kerala, I doubt if Pinarayi Vijayan's real house will come up even in the top 100 list!

Even though it is the personal choice of any one to have a big house or small house, it would have been better if the real house photo of CPM State Secretary Pinarayi Vijayan was published. At least, that will help to stop circulating all misleading information and the rumors spreading about the said house. If that hadn't keep a top secret, it wouldn't have become a controversy at all. Big houses are very common in Kerala and politicians are no exceptions.

On the other hand, we should respect the privacy choice of people. Just because Pinarayi is a politician, he does not lose his privacy choices. It could be just a personal decision for privacy reasons that he does not want to publish the photo of his real house. Politicians too have a family and a house is more like a family matter. Many politicians like A. K. Antony do not want to mix family with politics. If someone don't want to publish the photo of their house, let us leave it to them and Keralites have bigger problems to worry than going after the house of someone.

Why should there be a controversy like this about the house of a political leader. There are umpteen means of communication and publication. The channels and news papers reach each and every corner to extract news and other details. Is it difficult to get the picture of the original house ?

Let us avoid controversial material from our site and be constructive.

Faith in politician are not much there
these days for people.They build house or
demolish is not their concern.
Our concern is not to allow any anyone
to send such information through net,
it is for apolitician
or a common man.The media has played role
in bringing it public.
Whatever it may be the crime department
had done their job.This will reduce doing such nonsense.

why dont he counter with the original photograph???he has to account for the revenue for amassing wealth

Making a house to one's taste is ofcourse his own freedom. But he is accountable for the revenue since vijayan has no source of income other than the meagre allowance given by the party especially when he is under the shadow of suspicion in elecricity scam.Moreover you will find many politicians house energy meter connection is cut off or meter not working. Padmaja was caught for this and fined 1.5 lakh rupees.

Hi,
Congrats! The article posted by you is such a stunning one that each and everyone is in search of this. You did a good work. Keep your good works going.

Hi,
Its really a matter of concern for the media of kerala on checking on the person who seems to be filling in Keralites blood the "violence of equality". You seems to be talking as a communist and supporting the cowardest man in kerala politics. Please take care not to post such articles especially supporting such people who tells "a second hartal can be afforded by the people of kerala".. Foolish..

A building is a non-productive asset. Let pinarayi own a house bigger in size than the one displayed. What happens to the Netas holding huge areas (running into thousands of acres) of land and estates or plantations and the return/income from such properties? Publish a list of planters and their political connections. And who are the Netas directly involved in liquor business? Let all pol parties publish a white paper on this. MALAYALEES ARE FOOLS, REALLY FOOLS!100% fools with 100% literacy, and that educated fools! "Paapam cheyyaathavar kalleriyate"