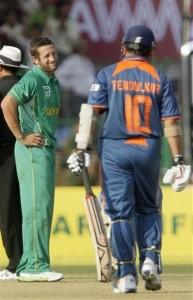 India is playing 3rd ODI against South Africa in the series of 5 ODI series in South Africa's Tour. You can watch live score in times of India website. This s the last tournament of Team India before the big mega Cricket event ICC World Cup Cricket 2011 which is scheduled on coming February 19 in Asian subcontinent. The final will be held in Mumbai Wankede Stadium.