Watch ICC Cricket World Cup 2011 Opening Ceremony Live will now be hosted on Dhaka, Bangaladesh on 17th February 2011 which will be broadcasted live. The countdown time has started for Opening Ceremony of ICC Cricket World Cup 2011 will be held in Bangabandhu National Stadium in Dhaka on Feb 17th, 2011. The opening ceremony is being taken care of event management agency Wiz Craft Entertainment. 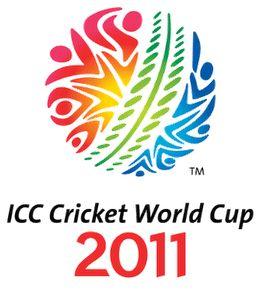 The 10th edition of ICC World Cup starts just a few hours from now. SPiderKerala has made a great opportunity for members to earn a lot during this world cup season.
• Daily prediction contest-Spot the winner: Earn Rs 50 daily
• World Cup Mega Contest: Predict & Earn Rs 500
• All are free to join
• When you have got an opportunity- Why letting others to earn?
• Click here to join and Participate
Cick here to know more
The 10th ICC Cricket world Cup will take place in the three South Asian Countries India, Sri Lanka, and Bangladesh. Pakistan also was in the lists of Co-host countries. But ICC dropped Pakistan from the lists due to uncertain security concern. The issue, which is related to terrorist attacks in Lahore during Sri Lanka's tour in 2009, has dropped Pakistan from the co-hosting of coming World cup Cricket.ICC World Cup 2011 Schedule and time table is already out. You will get ICC World Cup 2011 Schedule and time table from this resource and we would update if any changes in ICC World Cup 2011 Schedule and time table

ICC World Cup 2011 Opening Ceremony Live Streaming
This is the first time that a World Cup Cricket is hosting by Bangladesh. India , Sri Lanka and Bangladesh together co-hosting the awaited event. Pakistan supposed to host 14 matches, out of which 8 matches added to India, 4 matches for Sree Lanka, 2 Matches for Bangladesh to host. ICC final announcement says that India will host 29 matches in 8 venues, including final match in Mumbai, Sree Lanka will host 12 in three venues, and Bangladesh will host 8 matches in 2 venues. On February 18th 2011, Bangladesh will organize opening ceremony. Total 49 matches will be played as in 13 venues. Get the details for
all world cup 2011 match venues and places of interest near the venues.

The Highlights in the ICC World cup 2011

ICC World Cup 2011 Opening Ceremony Live Streaming
As per ICC World Cup 2011 Schedule and time table, there are totally 14 teams participating in the 2011 world cup, which is sharing the venues by three Asian test playing countries. There are two Groups as A ,which includes Australia, Pakistan, New Zealand, Sri Lanka, Zimbabwe, Canada, Kenya, and Group B which, includes India, South Africa, England, West Indies, Bangladesh, Ireland, Netherlands. The seven teams from each group will play each other once and four teams from them will qualify in to the quarter finals .The world Cup first mach will start on 19th February with the match of India v Bangladesh in Sher-e-Bangla Cricket Stadium, Dhaka and the Final match will be in Wankhede Stadium, Mumbai on April 2nd between the winners of first and second semifinalists. 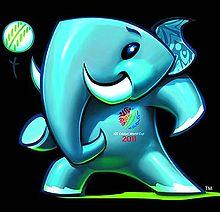 The official Lucky charm of this World Cup 2011 stumpy, he is a young and enthusiastic 10 year old elephant. The name 'Stumpy' is decided by ICC after an online competition in which all the cricket lovers participated in the end of July 2010. 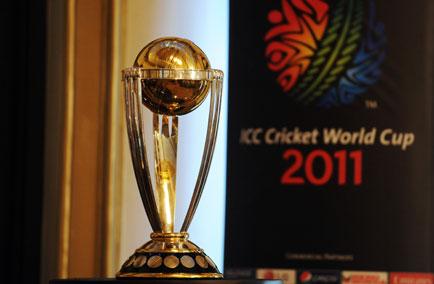 Garrard, the Crown Jewelers of London made the trophy of ICC World cup, which costs around £ 40,000. The trophy is 60 cm in length and is covered by silver and gilt. The trophy will not be gifted to the winning team instead they will be awarded the replica for the same. Moreover, the Winning team will be given high prize money of US$ 4 million.


Already ICC declared the schedule for World cup Schedule. You can download given attachment at the bottom. ICC is declaed recently the change the Venue from Eaden Garden, Kolkata to Chinnaswami Stadium, Bangalore, Karnataka on 27th february of the Match India and Ingland because of they have unsatisfied with the preparation of Eaden Garden Stadium . You will get here details Chinnaswami stadium
Download the updated complete ICC Cricket World Cup 2011 Time table. ESPN Star Sports and Star Cricket won the rights of telecasting 2011 Cricket World Cup and broadcasting over 220 countries. 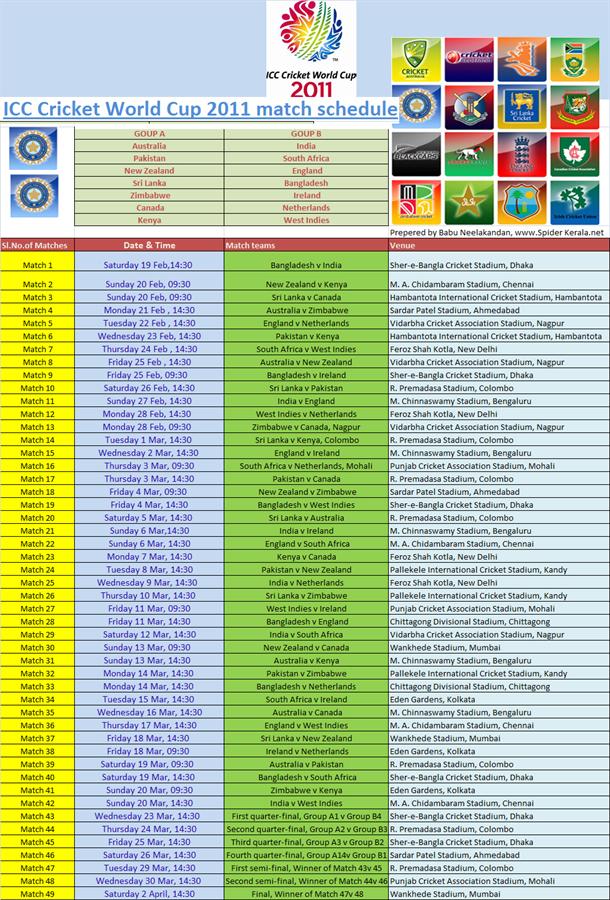 No Mr Babu .. you are wrong in stating that "this is the first time that a World Cup Cricket is organizing by more than one country". Reliance sponsored World Cup in 1987 was held in India and Pakistan, the first time that the competition was held outside England. Secondly, the 1992 World Cup was held in Australia and New Zealand. The 1996 championship was held in the Indian subcontinent for a second time, with the inclusion of Sri Lanka as host apart from Pakistan and India. In 2003, South Africa, Zimbabwe and Kenya hosted the World Cup.