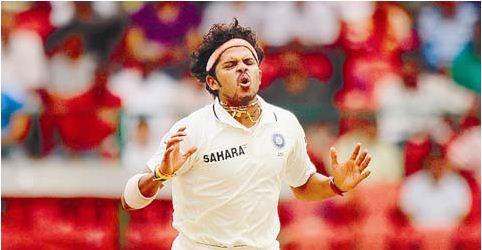 Sreesanth not part of ICC world cup 2011, The Kerala pacer was omitted from the 15 member squad to the 2011 world cup. Sreesanth was running in god form since the India tour of New Zealand and he done explicitly well against South Africa in the test Matches. The delivery which took the wicket of Jacques kallis is regarded as the delivery of year, Sreesanth was at the peak of his carrier.
The decision of omitting Sreesanth invited widespread response from the cricketing world. Former Indian captain Saurav Ganguly expressed his surprise over the decision of selectors and Kochi IPL team coach Jeff Lawson said it was not a right decision to omit a palyer with calibre of Sreesanth from the team for ICC world cup 2011
Look at the record of the pacers of those guys who has replaced Sreesanth in the squad for ICC World cup 2011, Munaf, Ashish Nehara and Prveen Kumar. In recent times Sreesanth has improved over others. In the wicket column Sreesanth second best behind Zhaheer Khan in last 3 months at good strike rate of 23.33. Sreesanth took 12 wickets in the last 6 games he played, whereas Nehra took 23 games for his 19 wickets at a strike rate of 65.55 and Munaf got only 3 wickets from his last 5 with a strike rate of 42.26. Surprisingly Sreesanth was more economical than and Munaf in the Last games he has played.

Sreesanth's bowling was vital in times when stubborn partnerships are building; Sreesanth got the ability to provide the break troughs. Sreesanth is a real fighter, even if he is taken for few runs, he fight to come back, but Nehra hasn't got that ability to bounce back he can mach winner on his days only.

Sreesanth is more athletic than any fast bowler in the team; you would have hardly seen Sreesanth mis fielding. Sreesanth is one of the few bowlers in Indian team who field at backward point and short third man no other bowler and number of Batters don't field at this position. Sreesanth is good at covering the boundaries; he put in every effort to prevent the ball from crossing the ropes. Majority of the Indian players are reluctant to slide but Sreesanth differs from all.

Why wasn't Sreesanth included in the squad for the ICC World cup 2011..?.

Sreesanth was not in good book of captain Dhoni, probably that's the one reason why he is not in the squad. Dhoni criticised before the media recently, for Sreesanth being overreacting at times during the match. Sreesanth was not given a chance to prove himself in the ODI's in South Africa; he couldn't be a part of the team in the first two ODI's before the selection of the squad for ICC World cup 2011.

Other reason why he wasn't included may his conduct, he has been in verbal spat with all the oppositions, he continued his behaviour even after continues warnings from Captain and BCCI.Bu how can this be reason for omission, there are many in the squad who have a really bad conduct

Sreesanth at times becomes wayward in his balling, Sreesanth is more of a rhythmic blower when he looses the rhythm the batters lashes on him. In tight matches this can be proved costly

Indian conditions are another reason according to selectors why Sreesanth couldn't make a place in the team. Out of it League matches India is playing 6 in the home ground, selectors believe that the Nehra and the spinners will be able to utilise the situation more efficiently than a quick bowler like Sreesanth