"Friends and comrades, the light has gone out of our lives, and there is darkness everywhere, and I do not quite know what to tell you or how to say it. Our beloved leader, Bapu as we called him, the father of the nation, is no more. Perhaps I am wrong to say that; nevertheless, we will not see him again, as we have seen him for these many years, we will not run to him for advice or seek solace from him, and that is a terrible blow, not only for me, but for millions and millions in this country."
– Jawaharlal Nehru's address to Gandhi's death 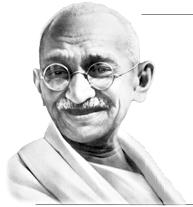 The father of our nation, Mohandas Karamchand Gandhi was assassinated by a Hindu religious nationalist- Nathu Ram Vinayak Godse on January 30th 1948. Gandhi's vision and finest dreams were fulfilled at that time- India got independence and it has been a independent nation. To pay tributes to the man who devoted his complete life for the entire humanity and the cause of Indian freedom, the country observe death anniversary of Mohan Das Karamchand Gandhi as Martyrs' day in India.

The whole country pays homage to its National father on his death anniversary on Martyr's day. This is the sadest moment for every Indian for the cause he too became a prey to violence which he never supported. On January 30 morning, the President Pratiba Patil, the Vice President, the Prime Minister Manmohan Singh, the Defence Minister A K Antony , and the three service Chiefs gather at the Samadhi of Mahatma Gandhi at Rajghat to lay wreaths on the Samadhi. Rajgat is decorated in multi-colored flowers on this day. The armed forces personnel blow the bugles sounding the Last Post. The inter-services contingent reverses arms as a mark of respect to the martyrs. Religious prayers and bhajans are held at Rajgat and other important places throughout the country. Latest military innovations and achievements are also showed on this day.

Throughout India, a two minute silence prayer is observed starting at 11 am. This is how every Indian shows his tribute to the great soul by giving 2 minutes from his/her busy schedules, remembering the great loss and praying for his soul. 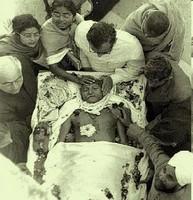 Gandhiji was assassinated inside Birla House (presently Gandhi Smriti) exactly at 5.17 pm when the man of prayer was attending a prayer program. Gandhiji was coming to attend the prayer program along with his granddaughters Manu and Ava. While Gandhiji was stepping up to the stage, a young man in Khaki came close to Gandhi and tried to touch Mahathm's feet. The granddaughters prevented him to not do that as Gandhiji didn't like touching feet.
But Godse, the young extremist of Hindu Mahasabha, was restless. He pushed the two girls aside and triggered three bullets to the chest of the man who delivered us the most promising moment we ever had. Gandhiji fell down and the last words throbbed out from his throat was "Hey Ram, Hey Ram". The biggest lost had taken place until then. Godse was hanged on November 15, 1949.

Gandhiji had a different idea towards life. It's very difficult to believe that a person like Gandhi lived in the country and gave us freedom only with his idea of non-violence. Some of the inspiring thoughts of Gandhiji are:

• Happiness is when what you think, what
you say, and what you do are in harmony


• Freedom is not worth having if it does not include the freedom to make mistakes.
• I cannot teach you violence, as I do not myself believe in it. I can only teach you not to bow your heads before any one even at the cost of your life.

• A man is but the product of his thoughts. What he thinks, he becomes.


• Strength does not come from physical capacity. It comes from an indomitable will.

• When I despair, I remember that all through history the ways of truth and love have always won. There have been tyrants, and murderers, and for a time they can seem invincible, but in the end they always fall. Think of it--always.

• No power on earth can subjugate you when you are armed with the sword of ahimsa. It ennobles both the victor and the vanquished.

• You must be the change you want to see in the world.