Today is January 30th and the red letter day in Indian Calendar in benevolent rememberances of our Father of Nation who was assassinated this day 63 years ago. Hence this day is aptly well remembered for the visits that Mahatma Gandhi made to Kerala. Mahatma Gandhi was greatly impressed with his visit to the Sivagiri Ashram and the actions / words of Sree Narayana Guru. 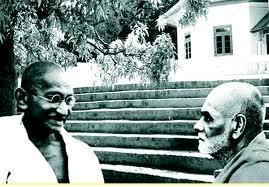 Mahatma Gandhi for the first time visited Kerala on August 18, 1920. It was at 2.30 p.m. on August 18, 1920 that Mahatma Gandhi arrived at the Kozhikode railway station. It was in Kozhikode from where the European colonisation took roots in India. The Kerala visit was as part of a nation-wide campaign to garner support for the Non Co-operation movement against the Britisher's Rowlatt Act. His visit was also to get support for Khilafat Around 20,000 people turned up at the Kozhikode beach that day evening to hear the inspirational speech of Gandhiji and to extend the wholehearted support. Mahatma Gandhi exhorted the masses to adopt non-violent methods of agitation. While addressing the 20,000 crowd assembled at Kozhikode beach, Gandhiji came down sharply and heavily on the British government for showing utter injustice to the Sultan of Turkey, by revoking their earlier promise to the Muslims in India during the First World War. The other points made by Gandhiji were about the goals of Swadeshi movement and need of buying and using only Indian made products. He sought support for the Swadeshi movement.The speech of Mahatma Gandhi was translated into Malayalam by Shri K. Madhavan Nair. Ramunni Menon handed over a cheque of Rs.2,500 as a contribution to the Khilafat fund to Mahatma Gandhi.

Gandhiji's second visit was to attempt to destroy forts of untouchablity prevalent in Kerala and to correct this insane state. Gandhiji visited Kerala in March 1925 for the second time. He was given a magnificent welcome at Vaikom on 9th March 1925. The mission of his visit was for the propaganda of Vaikom Satyagraha which aimed to open the road to temple for all sections of Hindus. With his superior knowledge in Hinduism and above all greater understanding of humanity, engaged in dialogue with tamil Brahimns, vanished Principalities Rajas and their representatives, representatives of Sudras and Indanthuruthu Neelankantan Nampyatiri who were all resigned to preserve caste. Gandhiji spoke to a number of audiences at Aleppy, Quilon and reached Varkala on March 12,1925. Mahatma Gandhi During this visit Gandhi visited Regent Queen Sethulakshmibhai of Travencore. Mahatma Gandhi also visited Sree Narayana Guru. Sree Narayana Guru himself received Mahatma Gandhi and was given the adhiti pooja. They discussed about the disease spread in Kerala ie the untouchability for hours together and the then District Collector of Kottayam, N Kumaran was the translator.Gandhiji was very much impressed on the Guruji's words about the untouchability and as per Gandhiji's wish, he could spend the night at the Math. After his visit to Guruji, he reached Trivandrum and addressed an audience of half a million gathered there. Addressing them, Gandhiji spoke about the Vaikom movement and about his meeting with Sree Narayana Guru. Titus Theverthundiyil, in Maramon of Travancore was the only Christian who was selected for the Dandi March in 1930 out of 78 marchers. Titus worked as Governing Secretary at Sabarmati Ashram in Ahmedabad and was very close to Mahatma Gandhi. During the second visit of Gandhiji in Kerala, he visited the house of Titus in Maramon on March 15, 1925. Mahatma Gandhi was on his way to the famous temple in Aranmula near Chengannur. This was one of the greatest events in Central Travancore and around thousands of people witnessed his visit. Gandhiji visited Trichur via Alwaye from Paravoor on March 18, 1925. He left Kerala on March 19, 1925. The roots of untouchability in Kerala found its decay sprouting after the visit of the great Leader, Mahatma Gandhi.

On October 14, 1927, Mahatma Gandhi strode into the Vivekodayam School in the heart of Thrissur town – the cultural centre of the Kerala State. He wished the students and wrote in the visitor's diary, "It was a great pleasure to be able to see hundreds of boys and girls spinning. There is considerable room for improvement in the quality of work turned out. Spinning loses its actuality when the boys and girls, and even teachers, do not wear khadi. The boys and girls should know why they are spinning. I would draw the attention of the teachers-in-charge to the necessity of pupils observing and understanding the rules of hygiene." In connection with Gandhi's visit, the Trichur school had organized a unique competition in spinning cotton on the charkha. Manakkulam Mallika Thampuratty, niece of freedom fighter Kuroor Neelakantan Namboodiripad, bagged the topper award. Gandhiji presented her a prize. During his visit to Trivandrum, he called on the Maharaja and Maharani of Trivandrum and discussed at length about the untouchability prevalent in Kerala. He also discussed about the entry of untouchables to the Thiruvarppu temple roads. After visiting Travencore, Gandhiji reached Trichur via Quilon and Kochi . Gandhiji after addressing a public meeting at Palghat on 15th called on Sankaracharya of Kamakoti peetham and held conversions with him. His third visit to Kerala attracted more number of people as is clear from the strength of crowds at each public audiences.

Mahatma Gandhi visited Kerala for the fourth time in 1934 and he was well received at Olavakode/Shornur on January 10. Here he paid a visit to Sabari Ashram and held conversions with the inmates and the Swamijis in Ashram. Later he visited Palghat where he addressed a women's meeting apart from a public meeting. Visiting Chittur, Koduvayur, Thenkurrissi, Veliyanchathanur, Gandhiji addressed a Nayadi's meeting at Kuzhalmannam. Gandhiji visited Gurvayur and Kunnamkulam and laid foundations for a free dispensary for Harijans at Akikavu. At Payyannur, he visited Shree Narayan Harijan Asram and addressed public meeting. Mahatma Gandhi visited Calicut on 13th January 1934. The date that signifies the 75 th anniversary of Gandhiji's visit to Mathrubhumi, is also celebrated as the National Youth Day in connection with Swami Vivekananda's birthday. Gandhiji was an admirer of Vivekananda and Sreeramakrishna. The Malayalam `Mathrubhumi' newspaper acted as a sword during the national freedom struggle. The Newspaper which released its first print on the first anniversary of Gandhiji's arrest by British government where he was sent to Erwada jail, became a daily newspaper on the day when Gandhiji broke the salt law with his Dandi march. Gandhiji unveiled the picture of Congress leader and Mathrubhumi managing director late K. Madhavan Nair, at Kozhikode Town Hall. Then Gandhiji visited Mathrubhumi, and there too he unveiled the picture of Madahavan Nair. Gandhiji, who admired the activities of Madhavan Nair, opined that Mathrubhumi was a newspaper which stood on its own feet and in India only few newspapers could claim the same. Mahatma Gandhi observed silence day on January 15 at Calicut. He visited the Zamorin and discussed the temple entry issue. After his sojourns at Cochin, Trichur and Kottayam, he reached Sivagiri Math on January 20 and this was his visit after the demise of Guruji. At all venues, he addressed the public and to the maximum possible extent, he made it a point to visit Harijan colonies and address their problems.

Mahatama Gandhijis fifth visit to Kerala was mainly to participate in the celebration of Temple Entry Proclamation announced by Travencore Maharaja Sree Chithirthirunal Balarama Varma on November 12, 1936. His visit was limited to Travencore. During this visit, Gandhiji visited the school of Ayyankali at Venganoor. Gandhiji praised the activities of Ayyankali He wrote about Ayyankali that due to his efforts, considerable progress is made in the condition of suffering of people. Ayyankali, for Gandhiji, was an untiring warrior. On January 21 Gandhiji reached Kottarakkara and opened the private temple of KMM Narayanan Nampoothiripad to all sections of Hindus. Gandhiji advised the gathering to utilize the time allotted to visit the temples religiously keeping one's mind and body clean. Mahatma Gandhi addressed the public at the temple premises said: 'My pilgrimage to Travencore had reached its final stage. My gratitude to all, who made it a success' .These words are to be written in golden letters as they turned to be his adieu note to Kerala.

The God's Own Country, Kerala was once divided into British Malabar and two princely states of Kochi and Travencore. This was first united under the umbrella of unity and nationality by the visits of Gandhiji. The concept of a united Kerala ( Aikya Keralam ) was a distant dream for the Keralites till the time Gandhiji came to Kerala. His visit united the minds of Malayalees which fortified the concept for a unified Kerala. His five visits to Kerala were like the incarnations in ancient sagas at each intervals.