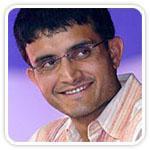 Team Kochi will not have Saurav Ganguly in the Upcoming IPL 4 starting on April 8. IPL's Governing council today revealed the basic facts against the inclusion of Ganguly in the IPL4. "The Franchisee have no interest to taken members who are unsold in the auction"-said Cricket Board's secretary N Srinivasan . Earlier, Ganguly was left unsold at the 2-day auction conducted in Bangalore on January 8 and 9 at a price of USD 400,000. The words of GC clearly dashed the hopes of two other capped players also- Wasim Jaffer and V R V Singh who also hoped to find an entry in IPL.

Chairman Chirayu Amin in the Marathon meeting of the Government Council spoke that Ganguly would not play in IPL4- following the objections raised by other franchises to the request from one franchise(Kochi). But the request was rejected because of the objections raised by other franchises. According to IPL rules, no capped players can bought outside the auction if he unsold there.

Karnataka batsman Manish pandey cannot play the first four matches of the IPL 4 Season 4. The reason for the ban is his new franchise Sahara Pune Warriors bleaching the player guidelines set by IPL4. Many complaints got from franchises and decision was taken based on the complains and after a meeting with the player.