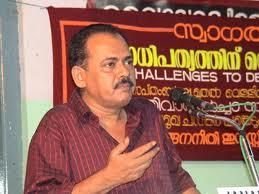 Former MP and media critic, Sebastian Paul has been appointed as the Chief Editor of Indiavision Channel. Decision was taken at a Board Meeting held on Monday. Official announcement will follow.

Though known among the public as Muslim League channel, Indiavision had landed in many controversies by airing reports that clashed with the Party interest. It is interesting that the choice fell on a leftist fellow traveler like Sebastian Paul. It is reported that renowned writer M.T. Vasudevan Nair was also under consideration for the position. But the Board zeroed in on the former MP, considering his illustrious track record as a journalist and media critic. He will assume charge officially on the 1st of March, 2011.

Nikesh Kumar, the former CEO of Indiavision has left the channel, as he is planning to launch a new channel

Mr. Sebastian Paul will have independent charge. This position will not come in the way of his freedom to function in the public domain or contesting in the elections.

But, a report has appeared later quoting Dr. Muneer, the Chairman of Indiavision, that the above report was wrong. No decision has been taken about the appointment of Dr.Sebastian Paul as Editor.