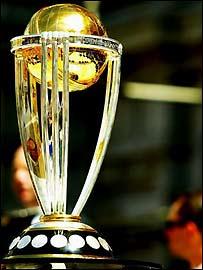 It is shocking news for all the cricket fans that tam India has lifted fake World Cup trophy after winning the finals of ICC world Cup 2011. Many Medias reported this matter. This is really a bad news for International Cricket Council (ICC) and also for BCCI. It is the duplicate or replica of ICC World Cup Trophy that was lifted by Indian Team. The real trophy worth about $130,000, but the trophy was fake this year. The original World Cup Trophy is marked with the winners name for last 36 years, but the fake trophy is not showing any thing marked. ICC and BCCI are going to take actions regarding this issue.

It is a shocking news indeed that India was given fake World Cup trophy after the magnificent win. That shows that the deception, cheating etc are there on international level.The BCCI and ICC are looking into matter and we can hope that the truth will come out and the culprits are found out and punishment is given shortly.

It is disappointing to hear that team India were given a fake world cup trophy.It is against the country and players who gave their everything for the final.Hope necessary measures will be taken in this regard and it wont repeat in the future.