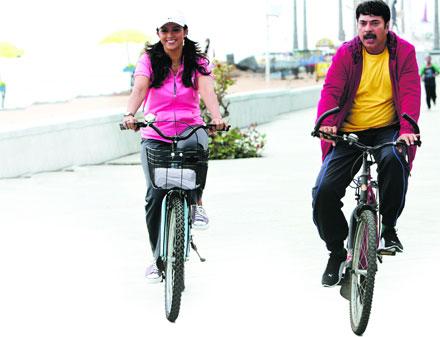 One of the biggest highlight of the Malayalam movie Doubles is the come back of the actress Nadiya Moidu. She was the actress who conquer all film lovers hearts during 1980s. Recently Nadiya was active in Tamil movie industry but she is acting in Malayalam movie after a long gap. Shyama and Poovinu Oru Poonthennal was the movies in which Nadiya and Mammootty came in lead roles.

The Malayalam movie Doubles tells the story of two twins Giri and Gouri. If there is any accident in Pondicherry the people first calls Giri and Gouri. They have got new improved facilities which can rescue peoples who suffer from accidents. Giri and Gouri are twins. They have lost their parents in the childhood itself through an accident. The often Giri and Gouri loves each other very much.

Even though the married age has over they have no intention to get married. They don't like any others to come between their love. Sameer, Manikunju and Susheelan are the other members of the accident rescue team of Giri and Gouri. Out of this three Sameer is the right hand of Giri.

Saira Banu is the girl who was rescued by Giri in road accident. Because of Saira Banu problem arises between Giri and Gouri for the first time . Saira Banu causes so many problems in Giri's and Gouri's life and film progress with these problems. Tapasi will came as Saira Banu in the Mammootty's Malayalam movie Doubles.

Mammootty's Doubles will have Reema Kallingal and Roma in Cameo Roles

The upcoming movie of Megastar Mammootty Doubles will have Reema Kallingal and Roma in Cameo Roles. The film directed by Sohan Seenulal will also have Tamil Actress Sonia Agarwal in guest role.

Mega Star Mammooty will have a vishu release this year 2011 as his forthcoming movie Doubles starring Nadiya Moythu and Taapsee now slated for a release on April 14. Read more about the release date of Doubles Malayalam Movie.

Check here for the releasing theaters of Malayalam film Doubles starring Mammmootyy, Nadiya Moidu, Taapsee which will hit the theaters on 14th April 2011 as a Vishu Release. Find the list of Doubles chartings in Kochi, Trivandrum, Calicut, Thrissur and other cities in Kerala