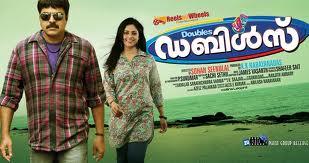 Mega Star Mammooty will have a vishu release this year 2011 as his forthcoming movie Doubles starring Nadiya Moythu and Taapsee Ponnu now slated for a release on April 14. Doubles is directed by Debutant Sohan Seenulal and the script is by Sachi-Sethu. The film has a huge star cast including Saiju Kurup, Suraj Venjaramoodu, Salim Kumar, Anoop Chandran, Bijukkuttan, and Avinash. Doubles is being produced by K. K. Narayanadas under the banner of Dreams on Wheels. Doubles will have Roma and Reema Kallingal in Cameo roles. The music of the film is by Subramanyapuram fame James Vasanthan and cinematography is by P.Sukumar. The editing is done by V.Sajan. The film completed in locations of Goa and Pondichery will make a wide release on April 14 as a Vishu release.