In Kerala itself we have seen a lot of Endosulfan victims through media . How can anyone forget the photo of young sainaba who left us due to abnormal growth of her head. But what is chemical details of this 'villain' compound? 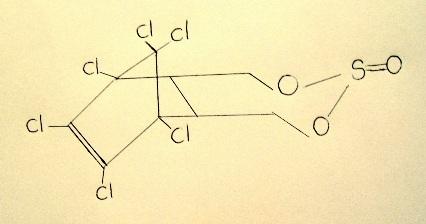 The chemical name of this pestiscide is 6,7,8,9,10,10- hexa chloro- 1,5,5a,6,9,9a- hexahydro– 6,9- methano- 2,4,3- benzodioxathiepine-3-oxide(indeed a bit long!) with chemical formula C9H6Cl6O3S . These compound is chemically classified under organo-chlorines pesticide ( carbon, hydrogen, chlorine prominent organic compound ).Its chemical structure is given here. It is brown crystals in appearance. It has got the same smell of just struck match stick( i.e. the odour of sulphur dioxides). Dont think that what we use as pesticide is just endosulfan - basically it is a mixture of compounds like endosulfan alcohol, endosulfan ether ,endosulfan sulfhate. Out of which Endosulfan sulphate is a prominent residue found in aquatic bodies, drinking water, food, plants and atmosphere near the area of application.These residues are found only at surface levels ( i.e. only on the surface level of the water, or the top portion of the soil). This is due to its low solubility in water and low binding ability with the soil. But it is soluble in most of the organic solvents. Endosulfan is mainly used on the crops like cotton , cashew , coffee . tea, tobacco ( beware smokers, endosulfan can blow you away! ) , timber and in some vegatables. Hope you have seen small helicotpters or planes flying over agricultural fields about just 2 to 5 metres height above the crop. This is called the Ariel spraying . Endosulfan is mainly applied to agricultural fields by this method. Its spraying also might have contributed a lot to the growth of this pestiscide as a danger to the near by civilians and organisms. It is a broad spectrum pesticide - effective against a large species of pests.It acts as a contact poison (poisoning when insects comes in contact with the pestiscide) .But poison of this compound have created a lot of problems to nature and human beings. Promoting economic crops by putting life in danger definetly make no sense (atleast there should be someone to eat the cashew you made!). So we should keep a healthy thought it's alternatives.


Biggest solution to all of the agriculture related problems regarding pestiscides is the use of Eco friendly pesticides . These choices will depend on the crop we are using and pest for which it has been used .Sucessful organic cotton farming stories from different parts of asia is a positive news in this regard.Similarly in vegetable cultivation many attempts have been carried out focusing on herbal pesticides. Methods of pest control using , garlic, chillies, cow urine are found effective. Following the Kasaragod Tragedy, Many cashew farmers have tried organic method and application of neem oil and pongamia leaf extract. There are also examples for tea plantations in India which has adopted green methods and completely eliminated the use of chemical pesticides. physical trapping of insects and pests is a logical approach to wards this issue.Apart from the biological methods a recent article in 'The hindu' have sited certain chemical substitutes for endosulfan.Imidachloprid , Thiamethoxam and Coregen are the pesticides promoted as replacements for Endosulfan. But Imidachloprid, is blamed for killing bees and is banned in France, Germany and Slovenia, among other European nations.


The biggest fact regarding the replacements is its affordability( it cannot cost more than life!!). Even then its better to live green.

Kerala enforces the ban on the Endosulfan use

The aerial spraying of Endosulfan in the cashew plantations of in the midst of the residents of the many villages in Kasaragod, Kerala caused many strange diseases and abnormal deaths. Now Kerala high Court is at the final stage of banning the usage of Endosulfan in Entire state.

The media in Kerala come out, these days, with news and views relating to the application of the pesticide in plantations and its effects on the life of people residing in the neighbourhood, especially in Kasargod area.

Endosulfan Tragedy in Kerala-Need of Ban on Endosulfan

Latest news coming from Stockholm convention at Geneva decided to ban Endosulfan globally against the wishes of India and China at the Stockholm summit.Kerala chief Minister V.S Achuthandan welcomes the decision of World wide ban of Endosulfan and he announced the govt will ask for compensation packages to rehabilitate the victims of endosulfan from the central govt

Endosulfan and its effects in Kerala