Onam is a very important festival for the state of Kerala in India. Everyone, irrespective of the religion or community that they hail from, get together during this festival and celebrate it with a lot of joy and pomp. People of Kerala believe that during the time of Onam, King Mahabali makes a visit to 'God's own country'. Onam is celebrated for ten days where the tenth day will fall on the Thiruvonam nakshatram (star). The tenth day is the most important one which is specifically celebrated with much more enthusiasm. Families and friends meet each other during this time. Some take holidays so that they can spend the festival with their loved ones. A grand feast is kept in most of the Keralite homes and even in restaurants on the last main day of the festival. Some of the highlights of Onam festival includes puli kali (tiger dance), snake boat races, kaikottikali (a form of dance), a grand banquet and pookalam (designs made with flowers). There are many traditional games also that are played during Onam. The collective name given for Onam games is Onakalikal. There are games which cater to people of different natures. The older people and those who don't like to run about too much for a game play indoor games such as chess, cards and dice whereas the younger people and the ones with more stamina play the outdoor games. There are both ball games as well as combat games which forms as the traditional games of Onam festival. Combat games are those which involve a great deal of physical strength and they include Attakalam and Kayyankali. Out of the two games, Kayyankali is the one which requires most amount of strength.

Some of the traditional Onam games 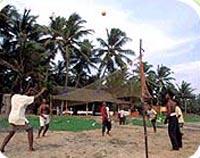 Talappanthukali is a form of ball game because of which it becomes an outdoor game. It is a game which requires a lot of stamina and some hard work too. In the Malayalam language, Panthukali means a game with the ball. In this game, the ball is made with many layers of plantain leaves that have dried up and then some small stones are put inside the leaves to make it a little heavy and then it is tied up with plantain or coconut fibre. The ball is not too big. It will look like a tennis ball itself. Those who are participating in the game are divided equally into two teams. At one end of the game court, a 'natta' or a stick is placed. There is no specific court or room to play this game. It is usually played in the open grounds itself with lines drawn manually to point out the limit within which the ball can be thrown by each team. When one team (one player from the side of the court where the stick is placed) serves the ball and attempts to hit the stick, the players of the other team should try to defend this by catching the ball. The server will be out if the ball has been caught from someone from the defending team. Otherwise, he gets a chance to serve again. The team that has won the game makes a circle around the 'natta' and then dance and sing in joy around the stick.

2. Ambeyyal - Ambeyyal is a game of archery and is apt for those who love shooting. Just like in normal archery, the game consists of a bow which is made of bamboo and arrows which are not sharp. The game is played only by the men folk. Blunted arrows are used because it is not a game intended to hurt anyone literally. Ambeyyal is played in order to test the skill and patience of the players. The game is played in two teams where the players of one team have to try to seize all the arrows of the other team's players. The players shoot the arrows A point is kept where a stick called 'cheppu' is placed. The team which manages to hit this point will be able to take all the arrows to keep with their team. Some players may get injured during the course of the game as the arrows are hit with a lot of force.

3. Kutukutu - This game is similar to Kabaddi with slight variations. People love to play this game as it involves a lot of fun and excitement. Many onlookers gather around to watch the game. The game is intended to test the strength, speed and tact of a player. In this game too, players are divided into two groups where each group will have eight players. The court is in the shape of a rectangle which enables it to be divided equally into two portions, each portion for each of the groups. To play Kutukutu, one group's player has to first go to the middle line which divides the court and then advance towards the opponent team uttering 'Kutu kutu' continuously without taking a single breath. He should manage to touch all the players of the opposite team and then run back to the middle line without being caught by any of the opponents. If he gets caught or if stops uttering the word 'Kutukutu' before touching the middle line, he will be out of the game. After this, the game still continues with each player of the same team coming to the middle line and trying out his luck and strength. When each player has finished his turn, the game reaches a half point after which the other group sends its players one after the other. 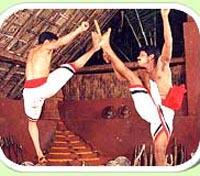 Kayyankali is a combat type of game which means it is a violent game and the people who play it need to have a lot of strength. Only men play this game. Kayyankali is played single-handedly in which two players fight each other using only the fists. Players usually use their left elbow as a shield and the right hand for attacking the opponent. If the player manages to shield himself from each and every attack from the opponent, the match becomes really interesting to watch. It can end up in a messy way where both the players could get immensely wounded with a lot of bleeding. There are even cases where death has occurred during the course of the game. No kind of weapons or horses are allowed to be used for fighting each other in this game. Only the hands and the rest of the body is used to fight and display the player's power and strength. Usually people of same level of strength are made to fight with each other so that the game is challenging and onlookers get to witness a tight match. A lot of people gather around the two players to cheer them. Victory is achieved for one player when he manages to make the other player fall on the ground. Players who are not very experienced in the game tend to attack the opponent on vital parts of the body which sometimes ends in the death of the other player. Infact Kayyankali is the most violent games that is played during the festival of Onam. 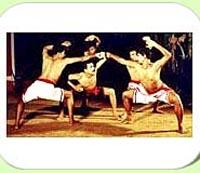 Attakalam is also a combat game played during the Onam festival where the difference from Kayyankali lies in the fact that Attakalam is played in groups and is a little less violent than Kayyankali. The game is played on large grounds of sand. A huge circle is drawn in the middle of the ground and one group is made to stand within the circle. After that, each and every member of the opposite group should try to make the members of the group standing within the circle to come out of it. For this purpose, physical force is also used and players have to try to dodge the other team's members. The inside team tries all methods to prevent the opposite player from pushing him out of the circle. In such occasions, beating and bullying also takes place. The person from the outside team should try to touch any one of the inside team's players. Once he touches a member, then it becomes a game between the two of them and the other players of the inside team are not allowed to touch the outside member. Only the person who has been touched can fight the opponent. If any member comes out of the circle, he is considered to be out of the game. After the opponent group manages to make every person come out of the circle, the game is reversed and the other team stands inside the circle. A group will win the game if at least one member of the group cannot be brought out of the circle. The two teams are selected in such a way that the strength of each player matches with each other. A good prize is awarded for the winning team.