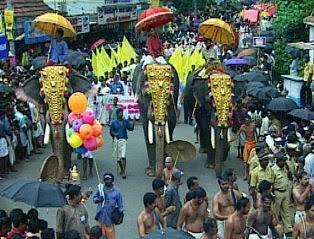 There are certain legends associated with Athachamayam festival of Kerala. In the earlier days the Maharajas of Kochi had a rule that they should travel with their whole group to the Thripunithura fort. So the people utilized this occasion to see their king very close. But some people believe that the Kochi Maharaja undertook an Athachamayam march to the Thrikkakara Vamana temple from Thripunithura. Actually these marches were made to show the splendor & glory of the king. 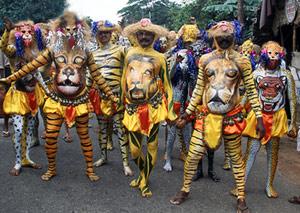 There are different art forms associated with this Athachamayam festival. Some of them are decorated elephants, musicians, theyyam, panchavadyam, karakattam, mayilattam, chendamelam, pambamelam, ammankudam, pulikali, aattakavadi etc. Among the above mentioned art forms, pulikali is known in different names like tiger dance or kaduvakali. I know all Malayalees are familiar with these terms. But theyyam is an important art form of Kerala that is commonly seen in the northern regions of Kerala. The interesting fact regarding theyyam is that it is also known in other names like Theyyattam or Thira. Apart from all these points, theyyam is considered as a corrupt form of God & people seek blessings from this theyyam considering itself as a God. Mayilattam is an important dance that requires good training & practice.

As the name indicates, I hope most people have got an idea regarding the mayilattam dance. The persons who perform this mayilattam dance have to wear costumes of a peacock with beak, from head to toe. These beaks will be closed & opened using a thread so that the dance resembles that of a mayil. Panchavadyam is a famous temple art form of Kerala state, India. Actually panchavadyam means an orchestra of five instruments that include Kombu, maddalam, timila, idakka & ilathalam respectively. There is an interesting fact associated with karakattam. The persons perform this art form by placing a karagam (pot) on their head. An unavoidable musical instrument used for the cultural programmes of Kerala is known as chenda. So remember that chendamelam is related to the instrument chenda. Ammankudam is a ritual dance performed by devotees of Bhagavathy or Mari Amman. I hope most people may have noticed this ammankudam. In this art form the performers do a balancing play by placing the pots on their heads. Remember that these pots are usually filled with sacred substances. Cultural competitions & entertainment activites are held as a part of Athachamyam festival.

Athapookalam or Onapookalam is one of the important characteristics of Onam celebration. During Onam season the competition of making Onapookalam is a passion for more than few years. Read more.